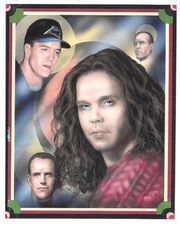 Freedom of Choice is a 235-page slash Sentinel novel by Too Loose. The cover is by TACS. It was edited by Noel Silva.

Summary by Kathy Resch: "Jim and Blair are given an assignment that leads them through a tangle of murder and corruption that could ultimately cost them their lives. As they unearth the clues to solve the case they also begin to uncover their feelings for one another. But is it already too late? A mysterious woman from Sandburg's past shows up and it is discovered that she is Blair's wife."

Summary from an ebay seller in 2007: "After the Sentinel has made his decision to give over his life and soul to his Sentinel duties, yet another vision informs him that his committment can't be complete because his '...Guide is not by your side.' This confuzzles Ellison no end, considering that Blair lives with him, works with him, watches Jag games with him, cooks with him....well, you get the idea. Then he finds out that Blair has been having the same sort of dreams/visions. HURT/COMFORT in abundance, this novel is an Alternate Universe from our guys' return from Peru at the start of the 2nd season."

An excerpt from the author's notes in the zine:

Well, here it is, finally. Its taken me well over a year, maybe closer to a year and a half to complete this. We put out our first show of interest flyer for this zine at MediaWest last year and at that time I was about halfway through the actual writing. But, as it very often does, real life reared its ugly head and got right up in my face. So, for those of you who have been waiting patiently for this story, I thank you, and I hope the wait has been worth it

I'd like to say that any similarities to other stories is strictly coincidental. Reading a few of the stories on the list from time to time gave me an uncomfortable moment or two, But after discussing them with two of my beta readers and my editor I was assured that it's impossible to avoid some overlapping of ideas and was forbidden to change anything that Id already committed to paper. So, the story stands as is.

One other note, for the purposes of this story the words Sentinel and Guide are capitalized. I'm not trying to challenge any literary rules or make any statements, I just prefer them that way.