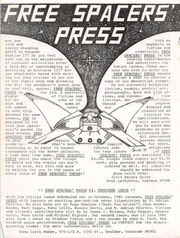 There MAY have been only one issue.

In 1982, Weber handed over Michael Rightor: "I am not associated in any way with 'Eridani Triad.'... I am also no longer associated with 'Free Spacer's Press,' having sold it to Michael Rightor last spring... He bought the magazine, its assets and its debts. I have turned all manuscripts over to him with my recommendations. He has a big load, so be patient, folks." [1]

Rena and Rightor had been two of the editors of the zine series The Captain's Woman.

Are you cold and lonely standing watch on Outpost Station 17? Do you feel left out of the mainstream of cultural activities after a hard day of spacehopping or bartering on Arcturus III? Are you absolutely bored with waiting for your cruiser to get out of the repair shop and dreading the bill the mechanic's gonna slap on you? Well, spacer, FREE SPACERS' PRESS is for you. A quarterly digest of fiction and art by some of the best and the newest names to ever slip between the same covers, FSP is designed to fit into your space-suit's pocket for easy access. FREE SPACERS' PRESS is your capsule guide to what's been happening or is about to happen throughout all the known galaxies.

With an emphasis on fiction and creativity, FREE SPACERS' PRESS is now seeking contributors and advertisers for future issues. Those persons who wish to write for FREE SPACERS' PRESS should include a SASE to receive a copy of our manuscript format. We are currently accepting fiction, essays, poetry) art, photographs, book and film reviews, and convention listings.

With its initial issue scheduled for an October, 1981 release, FREE SPACERS' PRESS will feature an exciting pen-and-ink cover illustration by M. Adrian Skirvin. We will have art by Hugo Nominee ("Best Fan Artist") Joan Hanke-Woods, Mary Hagan, Rena Leith, Bonnie Reitz, and M. Adrian Skirvin. Fiction and literary contributions will be by James J. Wilson, Miky Magyar, Bonnie Reitz, Rena Leith and Michael Rightor. Our second issue, due in late 1981 will have a cover by Stephen Fabian and a new column by John M. Ford. One hundred pages perfectbound, FREE SPACERS' PRESS is PERFECT for the discriminating reader. For more information, write to: Rena Leith Weber.

Free Spacer's Press1, the beginning of a quarterly publication, was a pleasant surprise for no to read. Free Spacer's Press is a general science fiction zine with a strong emphasis on the short story. As many hard-core StarTrek/media fans might have, I approached this publication with preconceived notions of sci fi zines being rather humourless and dry, geared to the tastes of the dyed-in-the-wool sf fans who believe ST and other media fandoms to be childish preoccupations with no meritoriously redeeming features; I started reading with a chip on my shoulder.

Much to my delight, that obstacle evaporated with the first piece, "...by any other name..." by Ruth Leith was a cleverly written, succinct work with a twist ending in the greatest Bradburian flair. As I continued through the zine, I found, much to my chagrin, an expose on a SF symposium, the kind o thing surly beginners use as a filler, and again I was taken aback. The report was articulate and precise but yet short enough not to bore those wishing to get on with the fiction selections. The suggestions made by James Winston were solid criticisms to rectify shlocky situations which occur all too frequently at non-pro fannish gatherings. Unfortunately the photos did not reproduce well, but the format and ideas made up for the differences good quality pictures would have made.

Field Trip by II. D. Magyar was a lighthearted look at a Bug Eyed Monster theme. This one visits~Earth as a native and fails miserably. Any anthropologist or social researcher will appreciate this one.

The next and most overwhelming disruption to my prejudices of SF zines came when I found a very complete up-coming convention calendar in the center which offered such dalliances as Star Con Denver, Westerncon, and Shore Leave, all being media oriented conventions. Imagine my delight at having these notable, if not staunch SF gatherings, mentioned on an equal footing with the more pristine SF cons.

Night Warriors by Bonnie Reitz follows the calendar and is a somewhat longer offering than its fellows in the Press. This piece confronts the human dilemmas of fear of the unknown and desires for the exotic object of those fears. Night Warriors is a must for all vampire fans or anyone who has experienced the paradoxical feelings of fear and desire for the forbidden.

The last story, Daydream Believer, by Kim Neidigh gives a look at the all too real world of adults through a child's eyes. Daydreaming becomes his only escape and finally his reality. A great deal of catharsis between the reader and the characters is created more effectively here in a very few pages than some achieve in volumes.

Poetry. Poetry is something I often avoid in a zine, something which seldom merits even one reading, much less several. Well, again Free Spacer's Press caught me off guard. The poetry is outstanding, all of it. The poems left me thinking (a sport I engage in only sparingly), and they also left me feeling in tune with the writer. I remembered the poems after having laid them down, a rare achievement for poets in fandom.

Book reviews were included but were kept to a minimum and were based on professional works. With the amount of professional SF material printed these days, a recommended selection saves the prospective reader/buyer from undue distress at the book store.

Overall, I would rate the Free Spacer's Press I a hearty success, and if I as a ST/media buff found pleasurable reading within the covers of a stiffly SF zine, it must have something! [2]