Fightback is a gen Blake's 7 novel by Margaret Scroggs. 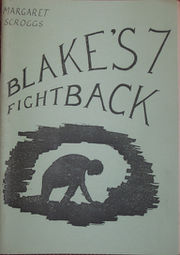 front cover of the single volume published in 1990

Exploring resistance: I find this [topic] very interesting indeed. Helen Pitt did it pretty well in The Power and the Glory, and Margaret Scroggs paddled here as well in Fightback. I'm less happy with Margaret's foray, though: she's welcome to voice anti-Marxist sentiments if she wants to, but it's no so much what she says as the way she says it that irks me. Hers is a rather soapboxy piece, cased in crude rhetoric rather than used a vehicle for dialectic. But the ambiguity and ambivalence are certainly there, and I call that A Good Thing. [1]

I managed to get Scroggs post PG series which starts with FIGHT BACK 1, 2. It goes SELF SEARCH 1,2, DOUBLE IMAGE, BLOODLINE and FRAME UP. (keeper). These are really just one long novel and should be read in order. Does anyone know if there's more? I just stayed up to 1:30 A.M. last night finishing the series. She has tie-ins to other stories she's written. The character Anselm is in it. I remember that story "For Jenna" from HORIZON 11 and have even kept that issue. Another character is from a story in HORIZON 6 which is long gone. # 6 is one of those Blakeless zines. I don't even remember the teeny weeny bit part in her story where Avon meets the clone. It's not necessary to read these two stories, especially the one in 6, to understand the series. I do remember that "For Jenna" was good, so if you have 11 you might consider rereading that before you start the series of small novelettes. I wouldn't go out and get the zine on purpose, though.

I do remember that "For Jenna" [in Horizon #11] was good, so if you have it you might consider rereading that before you start the series of small novelettes. I wouldn't go out and get the zine on purpose, though. Anyway, I was thrilled to be reading some new B7, even if it is gen, that has a lot of Blake in it. Actually, it has everyone in it, except Jenna, Cally, Gan, and Zen (if you count "him" as a rebel). All of the characters are treated well. Even Tarrant and Vila get juicy roles. Avon is wonderful, though slightly psycho once briefly. Blake is great, well, is great after some major brain surgery which gives him extra powers. I have a quibble with that, but I don't want to give away too much. I may like Blake, but I don't have to have him be "super." I prefer the more fallible Blake. Her Blake does get into a lot of trouble, though, and does make mistakes, so he's still a believable Blake. As for plot and characters, I do get terribly tired of the brat from the HORIZON 6 story. And of all things there's an "effing" elf in the story. Sheesh! If you like h/c, Blake gets hurt a lot, though the comfort is definitely missing. This is not a thinly disguised B/A story. I'm under the impression that Scroggs either likes both equally or likes both with Avon having a slightly bigger bit of her affection. My only problem with this series is that the font is reduced, and the print quality is poor. We are talking major eye strain.

Most of the Scroggs stories were written in the late 80's. I only bought these because they were dirt cheap. Actually, I had never heard of them. It's just when something is for sale for $1 to $2, it's worth a risk. How many of you have read this series? Did you like it? I realize most of the people in this APA are more critical than I am. Can you think of some other Blake works that might be worthwhile that aren't widely known?[2]