Female-presenting nipples is a much-ridiculed term which was first used by Tumblr in an update to its Community Guidelines that banned adult content from being published on the platform.

The ban was announced on December 3 2018, and came into effect on December 17, 2018. For more context surrounding the ban, refer to Tumblr NSFW Content Purge.

The phrase "female-presenting nipples" was used as one example of what Tumblr considers to be "adult" content, and attracted widespread ridicule and derision from users for its clear sexism, its bizarre phrasing, and its vagueness (even though the term was clearly intended to be specific). Many creative jokes, memes and variations on the term were posted to Tumblr.

Prior to December 2018, Tumblr's official stance on the posting of "NSFW content" was:

Sure. We have no problem with that kind of stuff. Go nuts. Show nuts. Whatever. [1]

On December 3, 2018, Tumblr announced that a full adult content ban would go into effect on December 17.[2] Tumblr's Community Guidelines were updated, and the Tumblr Support post about the update contained the following:

Examples of exceptions that are permitted are exposed female-presenting nipples in connection with breastfeeding, birth or after-birth moments, and health-related situations, such as post-mastectomy or gender confirmation surgery. Written content such as erotica, nudity related to political or newsworthy speech, and nudity found in art, such as sculptures and illustrations, are also stuff that can be freely posted on Tumblr.[3]

Tumblr's decision to remove content that showed "female-presenting" nipples while allowing "male-presenting" nipples to remain untouched (subject to a few exceptions) was immediately controversial and confusing. For one thing, it excluded many of the typical subjects of artwork and fanart on Tumblr such as alien beings, robots/androids, magical creatures and animals whose gender presentation might not be defined or obvious. For another, it was a blatant attempt to dress up old-fashioned sexism and outdated ideas about sex and gender (the view that female breasts = inherently dirty or "bad") in modern, progressive-sounding language. In a nutshell, it appeared to show Tumblr's users how completely out of step the staff were with their userbase, and short-sighted the adult content ban was. 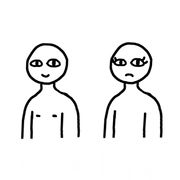 
I think my favorite response to the female-presenting nipples ban is people drawing nips with mustaches and saying they prefer he/him pronouns.[4]


I get that women’s nipples are censored because of (frankly bizarre) social expectations, but what the hell does “female presenting nipple” even mean? My nipples wear eye makeup and lipstick? Are my dog’s nipples also censorable?[5]

Supernatural actor Misha Collins joined in by tweeting a picture of himself drawing lipstick on one nipple and writing, "So @tumblr just banned "adult content" including something called, "female-presenting nipples". I can only assume my nipples will now sadly be banned there."[6]

On December 17, 2018, the day that the ban on adult content went into effect, Tumblr Staff published a lengthy post which attempted to address the widespread user dissatisfaction with its new policy. Notably, the post acknowledged users' distaste for the term "female-presenting nipples" in a bracketed aside:

Although, photorealistic imagery or photography – images, videos, or GIFs – with real humans that include exposed genitals or female-presenting (yeah, we know you hate this term) nipples or depict sex acts is not allowed per our guidelines.

Examples of exceptions that are still permitted but that you may need to appeal if they are misclassified are: exposed female-presenting nipples in connection with breastfeeding, birth or after-birth moments, and health-related situations, such as post-mastectomy or gender confirmation surgery. [7]

For some Tumblr users, the fact that Tumblr would go so far as to acknowledge their userbase's dislike of the term and yet blithely continue to use it without acknowledging any of its inherent issues was the ultimate insult.[8][9][10][11]

To cap it all off, users who posted the exact same images that Tumblr had used as an example of permitted content found that they were flagged by the algorithm.[12] 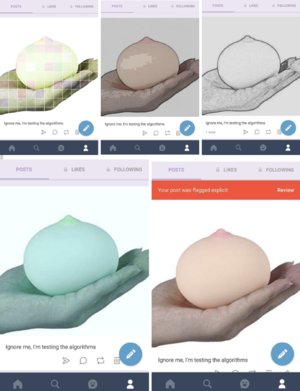 (image description: Variations on an image of a fake breast to determine how to avoid being flagged)
heinousactszx: "ok so our titty choices are now: cubism, jpeg, manga, and Picasso’s Blue Period"[13]

Tumblr's woefully inept automatic flagging AI led to many images that were only somewhat nipple-shaped being erroneously flagged, along with supposedly 'safe' male presenting nipples of actors. Activists pointed out that the clause may have been aimed at squelching issues surrounding gender identity expression. Tumblr users attempted to determine how the new algorithm functioned and identified nipples:

The bizarre language of "female-presenting nipple" was immediately mocked and parodied by Tumblr users in a variety of creative ways. Some took it literally, creating images of females literally presenting nipples[15] while others played on established memes and jokes:

An image edit created by facts-i-just-made-up to mock Tumblr's "female-presenting nipples" language. The caption read: "Has anyone posted a female presenting Naples yet?"

The Tumblr Titanic Vid, depicting Tumblr as the sinking Titanic as the purge approaches, references "Female Presenting Nipples" with an edit of Degas' ballerina painting L'Etoile floating as the waters rush into the cabins, illustrating the attack on culture as even classical art wasn't exempt from Tumblr's policy.

While there are legitimate arguments to be made about the unwisdom of tumblr’s soon-to-be-forbidden content choices - the whole “female-presenting nipples” thing and the apparent decision to prioritise banning tits over banning Nazis, for instance - the functional problem isn’t that they’ve decided to monitor specific types of content, but that they’ve got no sensible way of enacting their own policies. Quite clearly, you can’t entrust the process to bots: just today, I’ve seen flagged content that runs the gamut from Star Trek: TOS screenshots to paleo fish art to quilts to the entire chronic pain tag to a text post about a gay family member with AIDS - and at the same time, I’ve still been seeing porn gifs on my dash.

It’s absolute chaos, which is what happens when you try to outsource to programs the type of work that can only reliably be done by people - and even then, there’s still going to be bad or dubious or unpopular decisions made, because invariably, some things will need to be judged on a case by case basis, and people don’t always agree on where the needle should fall.

A take on the Distracted Boyfriend meme that satirises Tumblr's choice to ban "female-presenting nipples" over Nazis. Posted to Tumblr by dadmondmiles, who wrote, posted with permission from an AO3 volunteers chat room

what tumblr bans instead:

As non-binary and trans activists pointed out, the clause may have been aimed at suppressing issues surrounding gender identity expression after a non-binary activist, Rain Dove, was allowed to keep their topless photos on Instagram because they did not violate the specific wording of Instagram's user agreement. [20]

firefighterzarya regarding the exceptions for "nudity related to political or newsworthy speech":

i cant get over the stipulation that you can post female boobs if it’s a political protest. hey tumblr have you considered that the point of those political protests is that women’s bodies aren’t inherently more obscene than men’s. like my body is more than just a site for politics or motherhood or art. [21]