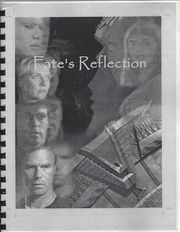 Fate's Reflection is a gen 364-page novel by Yum@. It was the winner of a 2001 FanQ and the Stargate Fan Award. Cover art by Yum@.

The zine was published in 2000 in print format. In 2005 due to its size, the fanzine was made available by CD or download. The publisher noted that the "Special Edition contains graphics, 2 new fics accompaniments. Reprinted in larger font zine as per request. Files are layout and encoded in PDF format."

Summary from a distributor, Agent With Style: "Jack O'Neill thought he had seen the last of the quantum mirror. But when someone comes through the Stargate wearing his face, he finds himself and his team thrown into a war that could bear impossibly high costs for them all."

The cover is a wonderful b/w compilation of scanned photos with what looks like drawn art by Yum@. It's covered with a clear plastic protector. There is no interior artwork, though the small chapter dividers are really cool symbols that could almost pass as hieroglyphs. Excellent double column layout with small borders. No wasted space. The layout and print look almost professional in quality. The story is rated R and is wonderful. It's very well written, and well edited. The characters spring right off the page as if you're watching an episode. The story is captivating. All around, this is an excellent novel and a beautifully laid out fanzine. It's one I'll definitely keep and read again. [1]

Yum has crafted a fascinating tale of an alternate universe, juxtaposing it against our original SG-1's reality. She has created duplicates of Jack, Sam, Daniel and other members of the SGC, but not of Teal'c. Many of the SGC actually meet up with each other throughout the story, and have somefun in the process. It is also a pleasure to find General Maybourne as a 'good' character - I knew he had it in him! The main characters are, however, Jack's double, Captain John O'Neill; Daniel's double, Dan O'Neill; and Sam's double, Commander Sammy Hansen. Dr Frasier and her 'double' also play a leading role. The breadth of the story is enormous, and the list of characters - old, newand duplicate - is vast. While the major characters maintain the momentum of the story, Yum does not forget her minor characters, and their contributions are intriguing, and often essential to the plot. She has even managed to have both Jolinar and Sha're play a part in the alternative universe.

Yes, Yum has played around with the alternative universe and come up with some interesting twists. As we learn from the first paragraph, John and Dan O'Neill are brothers. Dan was adopted soon after his parents' death by the O'Neill's, and is a much loved younger sibling. His life, until the Goa'uld invasion of Earth under Ra's leadership, has been happy and fulfilling, with his elder brother John playing an important part. Post invasion, both of them have become identified as enemies of Ra and their lives are endangered. Fleeing from Ra's Jaffa, John and Dan stumble through a mirror into our SG-1's universe. SG-1 eventually cross over into Dan and John's universe in an attempt to help them out, and to prevent Ra's Jaffa coming through the mirror to invade their universe.

This is a massive hurt/comfort story that ends with hope for Dan and John and their colleagues, despite the fact that they have a devastated world to rebuild. The characters and relationships ring true on the whole. Yum writes about - and obviously cares for - all of the team, although it would be true to say that it's her love of the Jack and Daniel friendship that comes through most strongly. Unsurprisingly, Jack and John are very similar, and therefore do NOT get on! The presence of two O'Neills in one universe seems to automatically lead to confrontation, as the episodes "Tin Man" and "Double Jeopardy" remind us. Sam and Sammy are a total contrast. Sam finds it hard to find anything in common with her battle scarred, bitter double, and she is confused by the fact that Sammy actually married Jonas. (Can anyone tell me why the Stargate writers find it necessary to duplicate names so often?). Teal'c remains uniquely himself, but he still has plenty to do in this story, especially in overcoming John's initial hostility with a typical act of courage and level-headedness.

I have read all of this zine about three times in all, and reread my favourite pieces time and again. There is much I enjoy within the story; my main gripe is perhaps the depiction of Daniel's character. This is a third season Daniel, shorn of the long hair, and newly grieving the loss of his beloved Sha're. He is the kind, considerate and thoughtful man of the series, but I am uncomfortable with Yum's depiction of his reaction to John's hostility towards him. Yum's Daniel seems a little too humble, deferential, shy and non-confrontational at times. In contrast, long-haired, AU Dan is loud, pissy, argumentative, assertive and very sure of himself, despite his physical limitations. I loved Dan, and I'm well aware that one of the reasons Yum chose to accentuate the differences was to contrast their respective childhoods, and show the subsequent effects it had on their personalities. It does work, but I still think that Daniel is short changed in order to achieve this effect.

Yum has made use of extended flashbacks to explain and expand her story's background. Mostly these work well, particularly in increasing our knowledge of Dan and John O'Neill. I feel they are less effective with Jack and Daniel, but that is possible because their stories are so well known.

This is a well-written and thought provoking story with an amazing range of characters. I cannot praise Yum highly enough for the way in which she succeeded in maintaining my interest throughout. She never takes the easy or expected path, and managed to surprise me with small details right up to the very end. Despite my general unease at the way Daniel is depicted, - he is just a little too naïve and sweet for my taste - I thoroughly recommend this zine. [2]

Fate's Reflection by Yum@, the grandaddy of SG-1 H/C novels. Epic length, featuring our team and their post-apocalyptic mirror universe doubles (a mirror universe in which one of Daniel's foster families is the O'Neills). Words can't express how much I love this story. [3]

At 364 pages of two-column reduced print, this zine certainly does not stiff the zine consumer on quantity, as is far too common in zine publication today. It’s not perfect; it needed another round of story-editing and copyediting. But, it's a satisfying tale of characters and relationships, looked at from the point of view of more than one set of those characters. The story snags the emotions right from page one and keeps you turning the pages right to the end. [4]