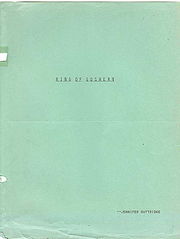 Cover of an early printed copy, title is missing "The".

The Ring of Soshern (often mistakenly referred to as "The Ring of Shoshern") is a slash K/S 40-page (single-sided, single-spaced) novel by Jennifer Guttridge. It was originally a privately-circulated Kirk/Spock story, and possibly the first of its kind.

It was written in 1968, and passed around among friends. Once in the wild, fans began to distribute it further than its author probably intended. Many fans remember it being a little more available (available being very relative) starting in 1973 or 1974.

In 1987, "The Ring of Soshern" was published (without the knowledge, much less permission, of the author) in Alien Brothers, a highly controversial print zine.