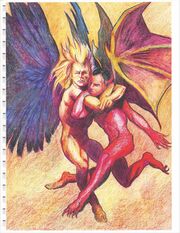 See The KSA Archive Interview with Taz for the editors comments about this zine.

Summaries below are from the publisher's zine flyer unless otherwise indicated:

This is a very well-written zine (many new stories from Dargelos, who wrote Pros as Fanny Adams! I'd track down and read her *laundry list*!), but it's not for the faint-of-heart or the sweetness&romance fans. The characters are violent men who kill for fun, and the stories carry a crystalline sharpness that can slice into your soul. On the other hand, the relationship between Fouchon and Pik (the name is South African, and actually pronounced more like "pook" than "pick," but even the zine's creators call him "pick") is highly romantic, fraught, loving, and intensely tender. It's just that these are men who feel and express their tenderness in highly disturbing ways.

My advice would be to skip the movie and just read the zine. (You do not need to have seen the movie to understand and love the stories; I hadn't. Actually, I was sorry when I finally saw the movie, because the characters didn't look at all as I had imagined them...!

(Full disclosure statement: I proofread much of this zine, and am friends with most of its creators. However, they not only didn't take most of my corrections, they misspelled my name in the proofreading credit(!), so please don't blame me for typos. And I like my friends too much to publicly praise their work if I didn't honestly think it was good.)) [1]