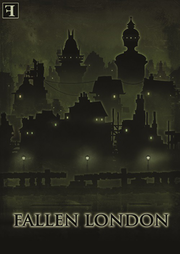 Fallen London, formerly known as Echo Bazaar, is a text-based browser RPG that takes place in the supernatural version of Victorian London. It's set in the same universe as The Silver Tree, Sunless Sea, and Sunless Skies.

The player character starts out as a prisoner who, after breaking out, may choose to discover various areas of the Neath, solve mysteries, amass a fortune, join various groups and rival factions, climb the social ladder, and make terrible decisions.

Shipping, while not a major part of fandom, is predominantly focused on the Masters and/or the player character. Other fannish activities include theorizing about the lore and trying to solve various mysteries within the story.