Eye of the Beholder is a Kirk/Spock story by Emily Adams. 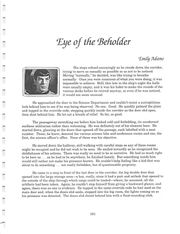 It was published in the print zine KaleidoScope #2.

"Kirk realizes that the archaeological team on board has found their universeʼs tantalus field, and decides to take it until he can decide what to do with it."

So strong is this author's mastery of dramatic structure that even where, as here, her story is based on a premise I don't find believable, I find her stories engrossing.

This story of Kirk's discovery of our universe's counterpart of the Tantalus device on an Enterprise archaeological survey gave him a valid ethical dilemma-whether to allow the device, whose potential only he has reason to know, to be unleashed on a suspecting or unsuspecting universe—however, that dilemma soon became subordinated to the tale of what happens when Kirk tinkers with the device. I found it hard to accept that Kirk would a) steal the device from the artifacts in storage—wouldn't the Big E have better security for scientific data? b) fail to involve Spock; c) fiddle about which such a deadly device unless he knew a damned sight more about what he was doing than he did here; d) be so inept at electronics. But mostly, I had trouble accepting Kirk as a voyeur, spying on the crew members under his command. Oh, I can accept that he'd take a peek or two at Spock (and that's really all he needed to do, for this story to work), but I think he's far too ethical to peep at the rest of his crew in the privacy of their own quarters.

Still, it's a good yarn, expertly told. The drama and suspense in the opening scene, when Kirk searches for the device, is absorbing. The dramatic tension and brisk pace are maintained throughout the story. If the person who found the Tantalus device, stole it and fooled around with it had been someone other than Kirk, the story could have been quite believable. But for Kirk to behave this way just undermines his character. The final part of the story, after Kirk thinks he has zapped Spock with the Tantalus device, is based on a nifty idea with solid support in behavioral science. Contemporary best practice in the field, represented, for example, by the work of the Institute for Applied Behavioral Analysis, is based on the principle presented here; one of the leading professional associations presents an annual "Positive Approaches" award to a practitioner of this method. Do you think Kirk would like to be nominated? Anyway, the idea used here was original and enjoyable. I think it would have been even more successful in a story that did not include the full freight of the Tantalus device, but dealt with some other mechanism suspected of doing what Kirk thinks the device does here. [1]

I approached this story with eagerness as this very straightforward author always has something unique and interesting to say. This time, she didn't disappoint as far as the story goes, but not without two rather jarring elements. I'm certain these things were put in unintentionally, but for me. they were pretty surprising.

Kirk comes across a relic dug up by some archaeologists that turned out to be the device responsible for the Tantalus field that had been used in the mirror universe. After absconding with it. he brings it to his cabin and tries it out. After repeated failures on inanimate objects, he decides to try it on an animal. I don't think I have to explain how I felt about that decision, but regardless of my own feelings, I honestly think Kirk would never treat a helpless living creature in such a callous and uncaring manner. Even aside from Kirk himself, hasn't consciousness been raised in the 23rd century about the value of all life forms? That one doesn't kill another just for an experiment?

Then, Kirk accidentally pushes the button when the device was trained on Spock. So thinking he had actually killed Spock, what does he do? Does he go wild and rush into Spock's cabin to find him? Does he at least tell McCoy who shows up at that moment? No. Instead, there's a confusing, seemingly out of place scene wherein Kirk speaks to an attendant about the little animal and then, rushes back to look at the screen. Perhaps that part got mixed up in there, but regardless of what Kirk did, it's what he didn't do that really threw me for a loop. He didn't say anything to anyone or even go to see if Spock was dead.

So once past this part, the rest of the story was interesting and amusing with some nice humor such as when Kirk agonizes over his confession to Spock - "The thought that all this stress might trigger heart attack and then he'd never have to tell Spock what he'd done momentarily occurred to him."

At one point, when they admit their feelings to each other and kissed as a prelude to much more, Spock pulls back in thought, then says they must meet later and discuss the ramifications before they go too far. So they meet later and instead of the serious discussion as suggested, they discuss a lot about what they are doing to each other (as in doing). I wanted to say quit with all the talk and get on with it.

However, overall, some good, solid writing and definitely a unique idea. [2]

He makes the device work, and doesn't mean to spy on the crew, but finds himself unable to resist watching Spock in his quarters. Kirkcatches the Vulcan doing something he didn't think Vulcans did, and it haunts him day and night....

The story is unusual, and I think the first one I've seen where the Tantalus device is found in our universe. It's a fun, sexy and well-written story. I absolutely recommend anyone who hasn't read it to try and get her hands on it! [3]