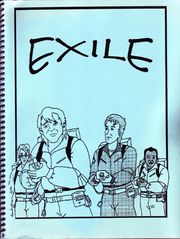 From Media Monitor: "A crisis drives Ray to leave without a trace. Meanwhile, a powerful ghost prepares to attack New York."

From Agent With Style: "A bust goes wrong, and Ray, believing he has caused the death of a child, disappears. While they try to find him, Egon, Peter and Winston must face a growing threat and discover the nature of the entity that is about to enter our world. Can only three Ghostbusters defeat it? Will Ray ever come home?"

From Bill Hupe's catalog: "The threat of accidentally killing an innocent bystander with the proton streams has always been there, but this time it looks as if it has finally happened, and Ray Stantz needs space and time to deal with the guilt he feels."

Proton packs are not toys... and that is abundantly clear when a bystander gets caught in a stream. How does Ray Stantz deal with an accidental death?