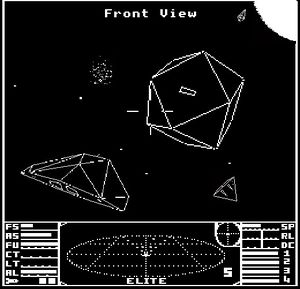 Elite on BBC model B computer 1984

Elite was an extremely popular computer game of the 1980s. The game revolves around space travel, trade, and combat; players began with a minimally-armed ship and had to earn money (by transporting cargo and passengers, or in combat as bounties for destroying outlaws and hostile aliens.) Money was used to purchase better weapons and other equipment, and eventually better ships in some versions. The game also kept track of kills (giving a rating from 'Harmless' to 'Elite'), damage and wear to the player's ship, legal status (clean, offender, or outlaw), and reputation for transporting cargo and passengers. The game was open-ended, and it was possible to become rich enough that there were no limits on purchases other than the constraints of the ship in use. It's widely considered to have been the game that made Acorn's BBC Micro a success, and was popular on all of its platforms. It was hugely influential, and most subsequent space combat simulator games have shown some degree of similarity. It is acknowledged as one of the main inspirations for the multi-player game Eve Online.

A feature of its packaging was a long novella, The Dark Wheel by Rob Holdstock which described the game setting as background for a story of a young commander seeking revenge for his father's death. It was the first computer game to include such support material and the idea was widely copied.

Elite was notable for running well on very limited hardware, using wire-frame 3D graphics and very compact code, but because of this compactness there was no easy way to modify the game; details of the game universe such as planet names and descriptions, political and economic type, and technological level were generated from pseudo-random seeds, and changing the code had unpredictable effects on these seeds. Most notably, when the designers found that their code gave one solar system an obscene name they found it easier to delete the galaxy containing it than to change the way system names were generated.

Two subsequent successors were Frontier: Elite II (1993) and Frontier: First Encounters (Braben only, 1995), both much harder to play; partly because they used more realistic spaceflight mechanics, and partly because they had various bugs. This led to considerable nostalgia for the original game and a desire to see it on more modern platforms, and the eventual development of Oolite, an open-source play-alike. Other play-alikes include Alite (2015) for Android and Unknown (2012) for iOS (iPad and iPhone).

Fandom for the original Elite has to a large extent moved over to Oolite or Elite: Dangerous. All of the original games are available as free downloads from Ian Bell's website, the Elite homepage.