Summary from a distributor, Agent With Style: "The Eden Project's sole purpose was to find an Earth-like planet in which human children could run free again and grow up without contracting the syndrome that was affecting so many children who had only breathed recycled air and lived inside spaceships or domes all their lives. But what awaited the small group who made it through to the new planet alive nearly ended the Eden Project before it could begin in earnest. Meet the Terrians, who only communicate by dreams. And the Grendlers, who may not be as slow and dim-witted as they seem. And experience Earth 2 again for the first time!"

Eden Project 1 has a front cover by Ona Sostakas.

Eden Project 2 was published in May 1998 and contains 176 pages. RAG is the front cover artist. 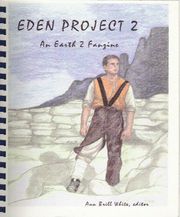