ESP is a gen self-described "podzine" (like a podfic anthology or serialized podfic podcast) that was recorded by various readers and covers a wide range of authors in Supernatural fandom.

The first issue was released in 2009 with a second issue being planned but never released. The editor writes in 2010:

Our second issue, on the theme of Apocafic, has been languishing as several readers were unable, through no fault of their own, to put the time into podficcing.

But we feel we owe our listeners and our authors our best effort to complete the project. To that end, here is what we're going to do.

The annual Amplificathon is currently underway at amplificathonRN. I am going to post the six stories I have read thus far in the next few days, and add in some more read by roque-clasique soon as well. Then I will continue to read the remaining stories and post them as well. Once they are all out there, I will go back and compile them into the 'zine form for anyone who wants the anthology."[1]

The compilation was never created. 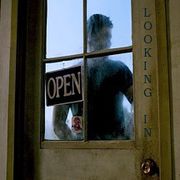 Looking In was published in 2009 and its theme was "Outsider's POV."

"Just wanted to pass on an en masse thank you and well done. I finished listening to the first issue yesterday and what can I say? 'Twas a gorgeous experience, and I honestly enjoyed every single story.

What was even more gratifying, was that they were all new to me. Outsider POV is not something I seek out much, but I found myself beautifully drawn in every single time here.

Absolute favourite was Parental Instincts. And Riverbella, listening to you? Is like having warm honey poured in my ears:)) You carried me right away into that classroom and kept me there."[2]

"Good audio all around, and good sound levels, I hate podcasts where the volume bounces around."[3]