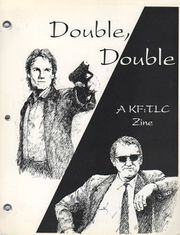 "Paper Tigers," by Karen Miller, Peter must return to the orphanage, undercover, to track down a ring of computer hackers. While there, he must face some of the demons of his past, both real and imaginary, and come to terms with them--one way or another.

"Cauldron of Secrets," by Mary G.T. Webber, has Kermit's past, in the form of an old enemy, catching up with him, and Kermit finds himself fighting for his life and everything he cares about--including, surprisingly, Caine and Peter.

The friend who loaned me this zine still hasn't gotten her copy back, and I'm hoping that she eventually forgets where it is so I can call it mine. She warned me not to start reading it at night if I had to get up the next day, and I'm passing that along as a serious warning. Despite a few flaws, the stories are compelling enough to keep the reader awake well past a healthy hour if not begun sufficiently early in the day.

Consisting of two novella-length stories. Double, Double is two hundred fifty-eight pages of well-packed, twelve-point, slightly-serifed Garamond typeface, which makes for a dense but attractive, easily readable text. The layout is clean, with adequate (but not extravagant) margins, and a minimal footer that conveys its information unobtrusively. Typos are extremely rare, and the writing is generally more than merely competent, something that seems increasingly rare in today's zine market. There are no internal illos, and only two one-page poems to act as counterpoints to the stories. The cover illo of Peter is a fairly competent pen and ink; while the matching one of Kermit does manage to make him identifiable, it still pretty much sucks. But this zine is not aimed at the artwork connoisseur, it's aimed at readers, and it does not disappoint in that arena. Unless you favor the Evelyn Wood method of zine consumption, you can't blow through this one in a short afternoon, so purely on the basis of hours of enjoyment per dollar spent, it's a better value than a lot of other publications.

Both stories are about the wounds of the past being violently reopened, but, while these tales are sequential in time, they are not two halves of a single linear progression. Rather, they act as opposing images, mirroring each other in some aspects and inviting the reader to infer the similarities, while the differences are simultaneously made clear. As the black and white juxtaposition of the cover design suggests, these stories are complementary opposites which create a harmonious whole.

In the first novel, "Paper Tigers," by Karen Miller, Peter Caine is assigned to a case which requires that he go undercover at the orphanage from which the Blaisdells adopted him. Littered with the occasional sentence fragment intended for emphasis, the writing is crisp, clear, and direct without being sparse or barren. Details and description are used to perfect effect, giving the reader a complete sensory experience while weaving all the threads of plot and character together in an entirely pleasing manner which is neither rushed toward climax nor padded with extraneous fluff. With scenes that are occasionally moving to the point of bringing incipient tears to this reader's eyes, the intertwined plots sweep one along irresistibly as the anticipated finale gathers momentum from its revealed elements.

In an alternating dance of parallels, the timeline switches between the present computer theft case and a series of past, pivotal events between Peter and Paul, from Blaisdell's initial decision to pursue the acquisition of the younger Caine to Peter's graduation as a police detective. Lightened by an inside view of Paul's relationship with Annie that is both realistic and warmly romantic, the primary focus is split between Peter's coming to terms with a long-held grudge against unbearable injustice and the effect his past has had in forming the man he is today. That man is a very confused, angry, lonely, mercurial, and charismatic guy, and all his facets are peered into from several angles in a diligent and mostly successful effort to discover why he is who he is.

The answer boils down to the three conflicting personalities who raised him: Kwai Chang Caine, Paul Blaisdell, and Sister Mary Joseph, the nun in charge of the orphanage, who is introduced here. Brought to life with startling vigor, she is a fully three-dimensional character with surprising strengths and flaws, all of which come into play in the process of bringing Peter to a better understanding of himself. As can be expected in fanfic, that understanding is not without its price in pain; in this case, a rather nasty injury which precipitates a reckoning with Sister Mary Joseph, some mystical vicarious suffering by Caine, an overtly protective gesture from Kermit, and a painful confession from Paul. One could hardly ask for a single bloodletting to be any more productive in terms of character advancement. All the characterizations are not only sympathetic, but dead-on perfect, down to dialogue rendered so accurately that one cannot help but hear the words being spoken, leaving the impression that one has not merely read the story, but experienced it.

The computer theft case is the background which serves to justify the story; this is primarily a study of personalities and relationships. Some relationships work right away, and some don't, and the reasons for success and failure are often the same. Likewise, many attempts are made in fandom to dredge up the formative years of a main character's life and give them a relevance to the present person. Of those, very few genuinely succeed. This is one of the exceptions. It not only succeeds, but enlightens, giving the reader an intimate look at family life, childhood traumas, and the lingering effects they create, while avoiding the myriad pitfalls common to treatments of such topics.

The second half of the zine contains "Cauldron of Secrets," by Mary G.T. Webber. The focus of this tale is Kermit, facing a demon from his mercenary past, and Peter's discovery of what friendship means to that most enigmatic of amphibians. To someone who is really irritated by Caine and his mumbled mystic platitudes, the story has an auspicious beginning. Shot in an ambush and wounded quite severely, Caine spends most of the story in a coma, providing an impetus to angst for Peter, and recovering consciousness only toward the end, in time to smile weakly from the hospital bed at a thoroughly changed Peter. Unfortunately, the nearly as annoying (but generally better groomed) Ancient takes Caine's functional place, administering his pronouncements of wisdom and insight couched in smug, impenetrable aphorisms. At least he stays quietly in the hospital, instead of tagging along for the rest of the adventure. There's a really evil bad guy, a lot of big guns, conspiracy and betrayal, traumatic flashbacks, some stuff that blows up real good, and a few realistically stressful physical injuries to keep our heroes humble and vulnerable. All the finest ingredients of good fanfic, and they come together here in an excellent, fast-paced, and suspenseful tale notable both for its physical action and its emotional themes.

Throughout the story, the author's imagery is strongly evocative and frequently strikingly graceful, but it is couched almost entirely in sentence fragments, making the flow choppier than it should be, and ultimately detracting from the ease of reading. Toward the end of the story, as events and emotions snowball into an intense denouement, the imagery begins to intrude, becoming more cryptic than explanatory, until the reader begins to lose the ability to visualize precisely what is going on. Not in the physical sense; the action is clear and moves along well. But the internal battles and revelations which form the essential bulk and the most interesting part of the story gradually recede from tantalizing hints into a haze of metaphorical ambiguity that is, in the end, disappointingly elusive despite its beauty. Which is a damn shame, because from the descriptions and hints given, the details would have been darned good.

In a similar vein, the reader is left to imagine the healing process which necessarily follows from the dissection of Kermit's character. Opened like an onion and gradually (if only partially) revealed through hints and flashbacks, Kermit's history as postulated by the author (and supported quite well by the canon this reviewer is familiar with) as it is reawakened by the events of the story leaves him shattered and lost. This is a good thing in one sense, for watching the process of destruction gives the reader more insight into what comprises Kermit's character than his actions under his own control would have. But then, having come so far, with hope and trust that he will recover fully, the story ends without even giving us a view of how his healing is accomplished, or how he and Peter come to a rapprochement. In the worst of fannish traditions, we leap across the intervening time in which the awkward process of recovery takes place, and are told in a few retrospective lines that the friendship truly begun in the first half of the zine, then explored, cemented, and threatened in the second half, was mended over a few beers. How, having delved in such detail into the dissection of this man and his mind, can we be happy with being cheated of the reassembly?

Now that I've complained so bitterly about its flaws, would I recommend this story to a KF:TLC fan, especially one enamored of Kermit? You bet! It is because the writer is so skilled and the theories and undercurrents within the story so powerful that its shortcomings are so much more frustrating. What is here has been crafted so well, one cannot help but believe that perfection could have been attained. What is here is not perfect, but it's still one of the most enjoyable zines I've read in some time. It will not disappoint anyone looking for something more than the run-of-the-mill, bonk-and-pity-Peter stories so rife within this fandom. This zine gets four trees, and a hearty recommendation to rush out now in a buying frenzy if you're a Kermit fan. [1]

KF:TLC fic is hard to come by these days; these are both gen novellas, one about Kermit, one about Peter, both fabulous. I wish they were online! [2]

These stories are layered, complex, in-depth character studies of Peter and of Kermit. Absolutely the best fanzine in this fandom. [3]