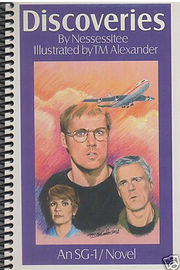 Discoveries is a slash 118-page digest-sized novel by Nessessitee. It has a color cover and black and white interior art by TM Alexander.

Summary from Agent With Style: "It's a 'slice of life' -- not the details of an adventure, but rather a page out of the lives of the people who make up SG-1, people dealing with very real feelings and issues."

There are many clichés in the world of Jack/Daniel slash and I generally quit reading when a story contains too many of them. I do tend to cut Nessessitee some slack in that area, though: let's be honest, she invented most of them! On my first reading of Discoveries, my main impression was a simple, romantic, first-time slash story, a bit cliché-ridden for my taste, fairly average...

On the second reading, I changed my mind.

The plot *is* very simple: Daniel is about to leave the SGC (temporarily) for a dig in Egypt. At Daniel's farewell party, Jack faces up to the fact that his feelings for Daniel have changed. Everything proceeds just as you would expect, some angst, some honesty, some sex...and no real surprises. But this story isn't about the plot.

It was on that second reading I realised: it's the clichés that make this story good. The reader can relax and enjoy a comfortable, familiar journey, and the author has gone to a lot of trouble to make it a first class trip. The plot doesn't follow a straight line from A to B. I think of it like a ballroom dance: the pattern of the steps may be pre-determined, but that doesn't detract from the performance.

The characters, rather than the plot, drive the story forward and the characterisations are wonderful. The author pays close attention to Jack's somewhat confused feelings for Daniel, beginning with an overheard song and moving ahead in a series of "set piece" conversations, interspersed with comedy. While the plot seems predictable throughout, there's plenty of tension, sexual and otherwise. The shifting mood between the two men as they drift from friends to maybe more to definitely more is exquisitely drawn. Jack's wrestling with the implications for his own sexuality comes across to this reader as realistic and very in-character. There is a countdown going on, too: the number of hours and minutes before Daniel's plane is going to leave that adds some tension of the more conventional kind.

There is also more to this story than just Jack and Daniel. All of the major characters play a part. They don't all get equal attention, but the appearances of Sam, Teal'c, Janet and General Hammond all serve to give the story an episode-like atmosphere.

What Discoveries lacks in originality it more than makes up for in characterisation and emotion. This is a slightly saccharine romance with a little angst and some lovely comedic moments. For anyone who enjoys reading Nessessitee at her best, this is a must-read. [1]