Destiny of Science Fiction is a "journal of news, views, and reviews related to the field of SF. Available for Art, Writings, News, or 20¢." There were three issues.

It has some cross-pollination with S.T.A.R. San Diego, a San Diego State University fan club.

Destiny of Science Fiction 1 was published in January 1975 and contains 10 pages. 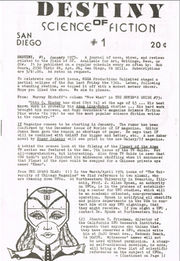 "To celebrate our first issue, MEGA Productions Unlimited staged a partial eclipse of the Sun last Friday the 13th. Later, following a standing ovation, we topped it off with a modest meteor shower. Hope you liked the show. We aim to please."

Destiny 2 was published in Spring 1975, cost 25c, and has 16 pages. The cover features a Dave Stevens depiction of Commando Cody from the 1950s Republic Pictures serials. Sourk forgot to alternate the even/odd layout pages before publishing and the pages are all out of sequence.

"Slowly he creeps, step by step, inch by inch, around the corner, and "...ohmighod no! Itsa nother fanzine." "Yes you fool -- it IS another fanzine. Hidden away from the authorities on the snowy peaks high above San Diego I've experimented for months on my plot to overthrow fandom with the straw that broke the camels [sic] back. And at last I've succeeded. Watch now as I add this vinegar to the baking soda, and..." "Nooo..."

There, that ought to hold the little Bug-Eyed Monsters. What?! We're not off the air yet?! Oh hell, there go the ratings!! *CLICK* Hey Edith, see what else is on, heh? And bring me another Bheer.[1] - Not Insane, Bob"

Destiny 3 was published in Fall 1975, cost 35c, and has 16 pages. The cover art is "Trilobite" by Steve Garris. The back cover and page 5 both feature "Wash-and-Werewolf" by Bill Stout.

"Welcome to the belatedly last issue of Destiny SF #3, published by Bob Sourk... I'm dropping this project in order to start on a much grander scaled one, The Science Fiction Bazaar, an adzine for you know what, and available for a dime. All subscriptions will be automatically transfered [sic] over to it, but refunds are of course available on request. All authors within, whether living or dead, have little touch with reality, so, Give the Univese [sic] Way; there's hope only if you're here.[2] Good bye Ruby Tuesday."