Debt of Dishonour is a Star Trek: TOS 114-page novel by Carol Hart. 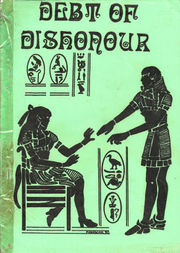 It has a sequel called "Ghost in the Machine" which used to be here.

Debt of Dishonour is a one-story zine by Carol Hart. It is excellently presented and at £2.50, is a reasonably priced zine. The 114 pages, however, are in large type and double spaced making the story seem much longer than in fact it is. There are no illustrations. The story concerns the Klingons' attempt to capture the Enterprise. In order to achieve this, they force a childhood acquaintance of Spock's to drug him so that they can implant a behaviour control device. In this they are successful. With Spock under their control they have no difficulty in capturing the ship. Trying to fight the implant, Spock has to come to terms with his treachery to every ideal that he holds dear. His problems are exacerbated by the belief that he has killed Kirk and the knowledge that the Klingons hold hostage the daughter of his childhood acquaintance. In a lucid moment Spock had made himself the only person, Federation or Klingon, who could control the Enterprise and consequently, finds himself the 'guest' of the Klingons who try to 'persuade' him to reverse the situation. I enjoyed the zine enormously, it being one of the three best one-story zines that I've read this year (the other two being by Glen David).

The main plot and sub-plots inter-act well together. In addition, her characters were 'real' - they seemed to be just right, especially Spock whose soul searching while aboard the Klingon ship was excellently done. My one reservation is that I believe that this zine requires an age statement, not necessarily an 18-year old but possibly a 16-year limit. During his time on the Klingon ship, Spock is subject to many forms of torture to make him cooperate and when all the usual methods are unsuccessful, Kor has Spock raped. Although it is not described in detail, the reader is left in no doubt exactly what has taken place. If Variations #1 required an age statement then in my opinion this zine definitely does. Having made that point, I would not like to put anyone off reading Debt of Dishonour. It is very well written with excellent characterisation and a story line that conceals not a few surprises; it is well worth reading. [1]

I originally read “Debt of Dishonour” in the 1980s; it had been published as a standalone fanzine from the UK. It was a nice surprise finding it on the net.

The first scene begins with the introduction of T’pavan, a woman from Spock’s past.

Spock has every reason to trust her, but she has an important motivation to betray him. When Spock returns to the Enterprise he has no conscious memory of his visit to T’pavan. He does not know that he has been turned into a weapon to use against the Federation, against the Enterprise, against James Kirk.

Writing Original Female Characters is often difficult to do convincingly, but the author does a great job depicting T’pavan as a fully realized, believable woman, neither villain nor heroine, but a tangled combination of both.

And! Kor is always the Best Villain! The author captures his charm and intelligence and utter ruthless depravity perfectly.

“Debt of Dishonour” is h/c (heavy on the hurt); it’s gen/het, with some nice K&S moments. WARNINGS for explicit het sex, implied non-con male/male sex, scenes of violence and torture. [2]