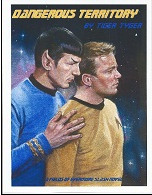 Dangerous Territory is a K/S slash 56,262 word novel written by Tiger Tyger. The cover is by Lorraine Brevig.

Series: "The Fields of Evermore"

Summary from the publisher: "How could it be possible for Kirk, Spock, and McCoy to find any trouble during their Earth-based assignments? After all, Jim is only a lowly admiral working under the irascible leadership of Steven Stearns in Fleet Operations; Spock acts as a new teacher for Science and Technology at Star Fleet Academy; and Bones is a new administrator at Medical Operations. More importantly, the three men are working their way around new relationships, adapting to different professional positions, new demands . . . as well as spiritual visitations, aggressive colleagues, jealousy, academic politics, and sudden violence. Come along and watch the next stage in the development of the legends of Star Trek: The Original Series!"

The man’s sharp green eyes looked him over, but there was no sense of friendship there. Kirk was struck silent and fell nearly senseless into his own chair, legs numb, his tongue stuck to the roof of his mouth, unable to speak. There was that same sense of obdurate power he had felt at the Stearns’ home, and he shivered, apprehensive.

“Do not fear, Admiral Kirk. I and my kind mean you no harm. We act only as messengers,” Nolan’s voice told him in stiff, formal Standard. It continued in a prophetic tone, “The threat comes. Your future arrives. Danger will rise up around you and obliterate all peace in this galaxy. Your world will be buffeted and torn after Star Fleet is destroyed, the Federation dismembered, if you do not stand fast. Remember who you are.”

He struggled to resist the pressure against him, making it impossible to move or call out for help. “I know you,” he managed to say between clenched teeth, sweat popping out on his forehead as he fought, his body straining against the invisible bonds that held it. “I’ve felt this—“

“Indeed. Our peoples have met previously, but I was not in this physical body.” The green eyes held an oddly translucent shimmer, as if the being itself were too bright to look on. “You must prepare,” it told him solemnly. “We will be powerless in the conflagration to come.”

“How?” he blurted, but between one blink of his eyelashes and the next, the being who had masqueraded as both Mrs. Stearns and Nolan was gone.

That wasn’t any damned ghost, he told himself as he worked to get his alarm under control and make his hands stop shaking.