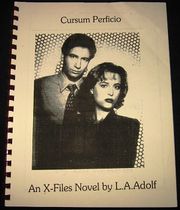 Cursum Perficio is a gen X-Files novel by L.A. Adolf. The first edition was 103 pages. The 2017 edition from Requiem Publications is 120 pages.

Summary from a distributor, Agent With Style: "'Cursum perficio' means 'my journey ends here,' and in this intriguing novel, Mulder discovers his journey may very well be over when he falls down an open elevator shaft and lies mortally wounded at the bottom. Will someone -- anyone -- find him before it's too late?"

Summary from Requiem Publications: Mulder is missing, and when found, badly hurt, his soul journeying to the light, to life, to health, to death. As Scully rushes to save his life - to keep him from going to the light - she fights her fears and learns where her journey begins and ends. Re-edited with some rewrites.