Crystal Blue Persuasion is a Starsky/Hutch story by Flamingo. 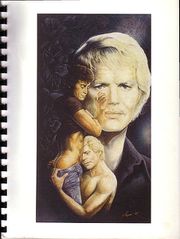 The cover by of the zine the story was in was by Suzan Lovett and was the inspiration for Flamingo's story.

It was published in Crystal Blue Persuasion and now online.

Inspired by an Illo by Suzan Lovett

According to the author's note this was Flamingo's first Starsky & Hutch story and it was inspired by the illo "Crystal Blue Persuasion" by Suzan Lovett. An author's note: "I saw it at a friend's house and asked Suzan where the story was that inspired it. She told me there was no story...yet. The illo became the cover of the zine by the same name." [1]

Personally, I'm not one for planning. If you saw my house, you'd know that. ;-) I usually get the desire to write a specific story because of a visual image I've conjured up. With Crystal Blue Persuasion I had a big visual image -- Suzan Lovett's picture of the same name. When I wracked my brain to put a story around it, there were 2 images that got me started (and if you haven't read it, consider this spoiler warning), one was the image of Hutch standing over Starsky in the hospital bed after the shooting in Shoot Out, and realizing how empty his life would be without Starsky -- pretty standard kinda stuff, but it's nothing I would have done in Vice -- and an image of Starsky, undressed, kneeling on his bed and coaxing a reluctant Hutch into it. But needless to say, the Lovett art really pushed that story. (I used her art piece for inspiration in Addiction and it actually helped me pull the theme together.) [2]

Some 2000 Comments by the Author Regarding Canon and Fanon

"Actually, I can see both sides of this issue, especially when you're dealing with a show as canon-heavy as SH has always been. Many fans writing now don't have the priviledge of having a library of uncut tapes from which to do their own research. And some things in SH *are* considered a given by fandom at large. We've all sat in fandom gatherings were stories were criticized because some critical issue in fanon wasn't used when the story called out for it, and it interfered with the believability of the story. I wrote my first SH story, Crystal Blue Persuasion, after having seen about 6 episodes (one of them the Shootout, from which the story takes off). My first readers had some problems with the story because of all the things I *didn't* know. I was able to edit it better with a few more episodes under my belt, so that it agreed more with canon and was more believable. (I'd come from Miami Vice fandom which didn't give a damn about canon.) However, my ending proposed a chain of events that would have been negated by canon. At that point, in spite of fan protests, I ignored the canon and kept my ending. Some people like the ending, some argue that it doesn't mesh with canon. I don't like canon to be a trap that doesn't allow us any writing freedom, however, a certain familiarity with canon or fanon (what fans assume canon implies) can help ground a story in verisimilitude. Stories that start with Starsky cooking gourmet meals and Hutch eating cold pizza and rootbeer for breakfast can make it hard to recognize the characters. But, if these changes in character evolve logically in the course of the story, that's different.

Of course, I totally agree with Suz re: not yielding to general fan belief if it doesn't suit you. I am a huge proponent of writing whatever it is you damned please, canon be damned, anyone's opinion be damned -- as long as you can make us BELIEVE it, and that is the major critical issue here." [3]

Well, in Crystal Blue Persuasion, [calling it an AU] is exactly what I did do.... I stuck with my ending. But before I finished my story, I did realize I had some "out of character" moments that definitely detracted from the believability of the story. That was experience *and* the help of fans who knew the guys much better than I

did. Yet, the information was for me to interpret and redesign to my making. So while I encourage people to find out what the "standard read" is on the guy's characterizations and learn enough about the show so as to not turn their characters upside down, I'm still proudest of the fact that numerous fans (especially some from when the show was in first run) will say to me, "Your Starsky is a very different Starsky than one I could imagine -- but I can see where you're coming from." That's the balance I think we should all look for. [4]

Starsky and Hutch's relationship is tested almost to the breaking point as they come to realize they're in love with each other, and my heart ached for them while I watched them try to keep from losing everything. The author doesn't ignore the implications of two men who've always identified as straight moving into a homosexual relationship. [5]

"Crystal Blue Persuasion" by Flamingo -- My favorite MV writer and one of my favorite writers in all of fandom has decided to come in from the Siberia of fandom into a realm where other people are actually *writing*!  :-) As would be expected, it's a solid story filled with angst and hot sex. This particular story is set not long after the episode "Shootout" (the one where Starsky gets shot in the Italian restaurant) and has Starsky trying to make Hutch face up to the fears the incident brought by making him return to the, as it were, scene of the crime. The second longest story in the zine, it's a strong closer for the zine. [6]

Really nice work.. thanks for a lovely treat. [7]

One of my favorite zines! That's great news [that you just posted it online], Flamingo, and a very sweet gift to everyone. [8]

I love S&H slash!! I've been involved with the X-Files fandom from the very beginning...but slash never did anything for me. Then I found Flamingo's site...and all that changed! My first ever was Total Eclipse of the Heart. Talk about starting out big, I read it in only 2 days...stopping only enough for food and showers. I don't think I even slept much, I just couldn't wait to get back to it. I also have the cover art by Suzan from Crystal Blue Persuasion set as wallpaper....and I don't care WHO sees it!!! [10]

I love Flamingo's writing and this is one of my favorites. A terrific follow up to Shootout.[11]