Crossing Paths: Through the Gateway

Crossing Paths: Through the Gateway is a 100-page Star Trek: TNG/Doctor Who novel by Laura S. Johnson. 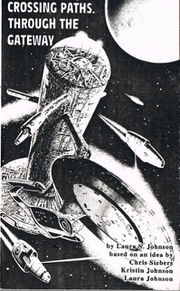 It was originally published in Tales of Rassilon between March 1992 and May 1993, and then compiled and published as a single novel in December 1995.

From the zine's back cover:

A freak accident has stranded the ENTERPRISE in another dimension, on the wrong side of an unstable wormhole. The owner of the wormhole, the GalaxSee Corporation, wants to keep the starship and the crew at all costs, as the tourist trap of the century. The crew is just beginning to trust the Corporation and their surroundings when a new player arrives on the scene: the Doctor!?

The itinerant time-traveller and his current companion, Ace, meet the ENTERPRISE crew just when a Time Lord's help is needed lost. But will Captain Picard believe the Doctor's words? Just how far will GalaxSee go to keep their prize? And even if everything else works out, the ENTERPRISE still has to get back to her proper sphere.

Dr Who and TREK mix? Read for yourself in ...