Title: An Imitation of a Light
Author: weaselett
Artist seraphina_snape
Word Count: ~60,000
Pairings: Gen (hints of het and slash)
Rating: NC-17
Warnings: Torture, Violence, self harm, suicide.
Summary: When the BAU are called in to investigate a series of murders that might be linked, one of their number discovers just how dangerous secrets can be.

Title: A Terrible Liar
Author: wolfinred
Artist magi143emmykat
Word Count: ~29,000
Pairings: Reid/Elle
Rating: NC-17
Warnings: Rape, torture, death, explicit sex, nonlinear storytelling.
Summary: Reid is secretly a serial killer. He kidnaps prostitutes and chains them up, torturing them over months before murdering them. At the same time, he continues to work as a member of the BAU and hold up a casual sexual relationship with Elle, but everything changes when he kidnaps her.

Title: Child of Autumn
Author: arwen_lalaith
Artist sarah_jones
Word Count: ~15,000
Pairings: Morgan/Prentiss
Rating: R
Warnings: Language
Summary: As if her life wasn't really fucking complicated already...all she needed was a pair of wings and to be at the centre of an interspecies war.

Title: Complete Opposites
Author: inward_audacity
Artist kramskii
Word Count: ~15,000
Pairings: Morgan/Prentiss
Rating: NC-17
Warnings: Language, Explicit Sex
Summary: They are as different as fire and ice yet they are attracted to each other like moths to a flame.

Title: Criminal Valley
Author: gracebe
Artist weaselett
Word Count: 30,086
Pairings: Hotch/Kate, Rossi/Strauss, Morgan/Garcia, Prentiss/Doyle, Seaver/Todd, JJ/Will, Gideon/Elle
Rating: NC-17
Warnings: Language, Explicit Sex, Violence
Summary: If it's 1871 in Nevada what time is it in Quantico? The BAU in the wild, wild west and it's not only the reaper that makes the desert an unpleasant place to live - and die!

Title: The Distant and Dead
Author: murf1307
Artist ryuutchi
Word Count: ~18,000
Pairings: Seaver/Gina, Rossi/Reid, Hotch/Haley, Morgan/Garcia, Prophet/Rawson, Sherlock Holmes/John Watson
Rating: NC-17
Warnings: Crossover, AU, steampunk, violence, discussion of post-mortem mutilation, drug use, referenced child abuse
Summary: The year is 1892. Sherlock Holmes has been dead for over a year. When it appears that Jack the Ripper has returned, Scotland Yard sends for a team of American detectives to take the case. But the plot thickens when an American appears to be involved in the case—an American the team has faced before.

Title: The Other Side
Author: wit_worry_what
Artist peasnbeanstalks
Word Count: 31,934
Pairings: Hotch/Reid
Rating: NC-17
Warnings: Language, Explicit Sex, Violence, Drug Use, Dub-Con, S&M Themes
Summary: Vampire!AU. The world is made up of humans and vampires, Doms and subs, and Spencer Reid has just freed himself from the Vampire Council’s clutches. Although trained to be the perfect sub, a Selected, he only wishes to be a BAU profiler. Meeting up with his mentor, Gideon, Reid finds himself on a brand new path full of heartbreak, drugs, and blood. No Rossi or Elle.

Title: The Shadow in the Cave
Author: vanessasquest
Artist ayashi_mikage
Word Count: 24,476
Pairings: Hotch/Reid
Rating: R
Warnings: Violence and Medical Description
Summary: The BAU is called in on a case, but things aren't going as smoothly as they could be thanks to a chance encounter in the middle of the night... now the team is racing to save one of their own and stop a killer who is hell-bent on revenge against a town that did him wrong.

Title: The Vortex of Friendships
Author: ice_ziggee
Artist kramskii
Word Count: 31,204 Pairings: Hotch/Reid
Rating: PG-13
Warnings: Mention of Rape, descriptive death, Language
Summary: Hotch brings in a new agent to the BAU and the agent notices unusual behavior among members of the team. Some uncareful words start a chain of events that force one member of the team to decide if he should face his fears or walk away. Unusual relationship is revealed, unexpected friendships form and an astonishing arrest is made.

Title: Alternatives
Author: ariestess & shatterpath
Artist: caitriona_3
Word Count: 15,667 words
Pairings: implied Emily/JJ, Dace/Catherine, Monica/Dana
Rating: PG-13
Warnings: None
Summary: New to the BAU, Emily Prentiss soon finds herself the focus of another, more unusual FBI team known as the Sentinel Project. Will she keep her hard-won position on the BAU team or transfer to this other team?

Title: Elusive
Author: kuriadalmatia
Artist: blythechild
Word Count: 40,062 words
Pairings: Hotch/Reid, Hotch/Haley
Rating: NC-17
Warnings: profanity, graphic case violence, sexual situations
Summary: When Reid quits the BAU shortly after Elle resigns, Hotch struggles to keep his marriage and new team together. The only things that get Hotch through the day are letters from Reid as the former agent travels the US. With a cold case haunting the team and the murder of Gideon’s longtime friend, Hotch reaches his breaking point.

Title: Reflections
Author: faithburke
Artist: annieb1955
Word Count: 20,000 words
Pairings: minor Hailey/Hotch
Rating: PG-13
Warnings: Minor Character Death
Summary: Crossover with Supernatural. There are thirteen extra Aaron Hotchners in the DC/Quantico area, trying to destroy the original any way they can. The Winchesters are the local experts, not the Unsubs inserting themselves into the case, right? Right.

Title: Set Fire to the Rain
Author: arwen_lalaith
Artist: kramskii
Word Count: 15,152 words
Pairings: Prentiss/Doyle, Morgan/Prentiss
Rating: PG-13
Warnings: Violence
Summary: Fusion with The Hunger Games. Emily Prentiss has done the unthinkable - a Capitol girl who volunteered to compete in the annual Hunger Games to save her best friend from a sure death. 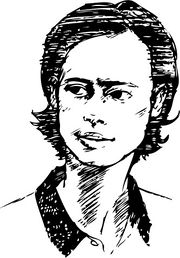 Art for To Face the Demons by hack_benjamin22

Title: To Face the Demons
Author: wolfinred
Artist: hack_benjamin22
Word Count: 23,500 words
Pairings: Emily Prentiss/John Cooley, implied Emily Prentiss/David Rossi
Rating: NC-17
Warnings: Graphic depictions of violence, major character death, noncon/dubcon, underage sex (15 and 16)
Summary: When Emily's old friend, Matthew Benton, is killed, she suspects foul play. She and the team catch the killer, Father Paul Silvano, and have him sent out of the country. But when he tells them they've just made the world a more dangerous place, he's telling the truth. Soon more murders, even stranger ones, are appearing on the BAU's radar, and John Cooley is hanging around a lot more. (AU/tag to 4x17 "Demonology.")

Title: Morally Indefensible
Author: blythechild
Beta: kuriadalmatia
Word Count: ~80,500 words
Pairings: Hotch/Reid
Rating: FRAO, or NC-17
Warnings: This story contains graphic violence, hateful/racist/homophobic language, attempted rape, child abuse, graphic sexual content (dubious and consensual), drug abuse, alcoholism (minor), and minor character death. Please take these warnings seriously - this is NOT a pleasant story. If any of these issues are remotely triggering for you, do not read this fic. You've been warned.
Summary: In this alternate version of present day, Reid is a disgraced, former FBI agent from the White Collar Crime division who has been wrongfully convicted of the brutal murder of his partner, Elle Greenaway. Sent to a federal penitentiary and thrown in amongst other killers, he doesn't expect to survive too long until he catches the attention of a mercurial thief and gang leader named Hotch. Hotch offers Reid protection but he expects much in return, and ropes Reid into a paranoid plan to oust the prison warden. The more Reid sees of Hotch, the less he trusts him, and the more he realizes that his life is no longer his to control. Who do you trust when everyone is out for themselves, and how far will you go to ensure your own survival?

Title: The Fox & the Trapper
Author: novalinx
Astist: twisted_slinky
Betas: bookgenius and writing2death
Word Count: ~18,500
Pairings: None
Rating: Mature
Warnings: Graphic depictions of violence
Summary: The team investigates a case in Georgia where they learn that not everything is at it seems and sometimes, fairy tales might be true.

Title: "Close our eyes, pretend to fly"
Author: that_1_incident
Artists: astral_angel and kymericl
Beta: The magnificent but LJ-less Xtina
Word Count: ~16,500
Pairings: Derek Morgan/Penelope Garcia
Rating: PG-13
Warnings: Semi-AU, the Boston Reaper, a fair amount of abyss-gazing, and a small guest appearance by Special Agent Leroy Jethro Gibbs.
Summary: As the proprietress of Penny's - unquestionably the best coffeehouse in Quantico, Virginia - California transplant Penelope Garcia relishes her role as bright, carefree hostess while almost entirely divorcing herself from her past. When Supervisory Special Agent Derek Morgan walks into her life with his high-stress career in the FBI and his own personal tragedy in the rearview mirror, her barriers begin to break down amid Doctor Who posters, unsubs, macarons, and exploding ambulances. But opening up to Morgan - and, by extension, to his colleagues in the Behavioral Analysis Unit - is not without its difficulties, and only time will tell whether Penelope is truly up to the challenge.

Title: Arkham Minds
Author/Artist: Twisted-Slinky
Beta: KimmiGrey
Word Count: ~24k
Pairings: Gen
Rating: T/PG-13
Warnings: Violence, Language
Author's Notes: This is set after my story For Laughs, but this can be read as a stand-alone if you wish. Its setting is after The Dark Knight, but with no references to The Dark Knight Rises. While it's a Nolan-verse crossover, it is also inspired by other Batman comic and cartoon storylines. For Criminal Minds, the story is set right after Gideon's departure and before Rossi's arrival (so, season 3, pre-episode 6 sometime).
Disclaimer: I do not own Criminal Minds or anything related to the Batman universe. I also do not own any quotes from Alice's Adventures In Wonderland. Summary: What happens when the madmen are running the madhouse? Dr. Spencer Reid and Agent Aaron Hotcher find out when they return to Gotham to visit Arkham Asylum. Spencer's been at the Joker's mercy before, but after the asylum goes on lockdown with the agents trapped inside with the inmates, he finds that this particular madman might be his key to surviving. Criminal Minds/Batman (Dark Knight) crossover, sequel to For Laughs.

Title: the lies we weave are oh so intricate
Author: bittereternity
Artist: mella68
Beta: My savior, Lynn. Thank you for reading this multiple times, but mostly for putting up with my severe disregard for deadlines and extreme flakiness.
Word Count: ~18,300
Pairings: Aaron Hotchner/Spencer Reid, minor Hotch/Haley, minor Reid/Maeve.
Rating: FRT
Warnings: Spoilers up to and including Zugzwang. Light dom/sub.
Summary: In a world where everyone is a Dominant or a submissive, Aaron Hotchner meets Spencer Reid, a man who simply wants to be neither. In the process of getting to know him, he never expected to a. fall in love b. fall in love with a member of his own team and c. fall in love with a man so infuriatingly unwilling to reciprocate.