Costumes Are Not Consent

Costumes Are Not Consent, or Cosplay Is Not Consent, is a catchphrase that has become widespread following online discussions about (mostly female) cosplayers getting sexually harassed at conventions.[1] It serves as a reminder to fans that cosplayers are human and should be treated as such. It also expresses support for fans who are harassed, acknowledging the behavior as inappropriate and giving cosplayers a voice to speak out in opposition to it.

Costumes Are Not Consent started appearing on signs posted at some cons in 2012.[2] New York Comic Con 2014 was the first major con to post the phrase publicly, along with a clearly stated anti-harassment policy, after 2013 witnessed several major incidents, twenty reported instances of sexual harassment[3] ReedPOP shared in 2014, the first year the signs went up, there were 8 reported instances, and that the rate has stayed steady at about 12 reported instances a year despite the significant growth of New York Comic Con.[4] Fans also report feeling safer on the floor as well as feeling respected by the organization. 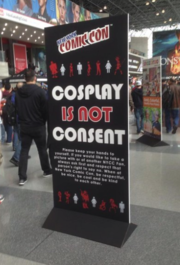 Example of signs at NYCC

Cosplay Is Not Consent became a movement within the convention circuit, with many cons posting signage and creating harassment policies, even without previous incidents, and following the lead of larger cons. Andrew Moyes, 2015 director of Fan Expo Canada:

I think it’s a movement within the convention world right now. It’s a heightened environment. People are excited and sometimes boundaries can be blurred,” he said. “It’s helpful just to have a few pieces around the event that … shape expectations and help everyone navigate their experience.[5]