Continental B and D: Have Partner, Will Travel 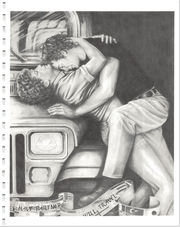 cover art by Suzan Lovett. -- winner of a 1995 Huggy Award -- Archived at The Circuit Archive 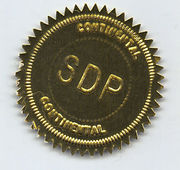 Continental B and D: Have Partner, Will Travel is a slash 158-page Professionals anthology.

The cover and art are by Suzan Lovett. Both the zine, and Suzan Lovett, won a 1995 STIFfie Award. The only other illo in the zine is single cartoon by Karen Eaton.

From Media Monitor: "A new anthology of Bodie/Doyle stories set anywhere except London. A mixed bag of tales from around the globe, featuring a maximum of plot overlaid with homoerotism. Mostly contemporary, some violence, some humor and one lengthy A/U novel."

[zine]: I've got to admit I was a bit disappointed by this zine, which is unusual for me as I love A/Us. It has a total of six stories (158 pages), the longest - at 89 pages - being "Fraternite" by Jasper. Set during the time of the French Revolution, it really needed editing, though it was readable in parts (lke the curate's egg). Nina Boal's 'Action - Life" is the story o f a grieving Doyle who has just lost Bodie to AIDS. There is a bleakness to this story, though by the end of it Doyle has rediscovered hope and is deciding to take life by the throat once more. 'Catch Or Kill* is a good read and up to Jane's high standards. Bodie and Doyle are sent off to find a colourful character from Bodie's past. I liked Rob Reilly and I'm glad that the Bodie of this story had him when he needed him. My favourite story in the zine is the humorous "Butch Bodie and the Sunshine Kid' by Gena Fisher. Bodie comes into an inheritance and the partners head out to the wild, wild west Bodie the bounty hunter is back in Marion's "Bounty". This time he is after Don DeMarco but things don't go according to plan... Continental B&D had some good stories but on the whole, the zine left me still feeling hungry. [1]

[zine]: ... one such purchase [a slash zine] led to a bit of excitement the other day. The postwoman knocked on my door with a second-hand zine I'd ordered from the States. "Continental B/D" had left the USA discreetly concealed in one of those UPS Priority Mail envelopes, but when the postwoman handed it to me, it was in a Post Office transparent wrapper. "It came open in the Post," she said. "I'm sorry. But it doesn't look damaged." And she gave me a very nice smile, so I can only assume she liked the Suzanne Lovett cover... [2]

[art]: Susan is a wonderful artist, but sometimes, to me, the figures seem a bit cold and stilted. This cover conveyed a passion that was very evocative.[3]

[zine]: Catch or Kill by Jane

CI5 partners and established lovers Bodie and Doyle are in Hong Kong pursing a former merc comrade (and ex-lover) of Bodie's. Doyle learns about Bodie's merc past. Jane does a nice job with the setting, and there's a wonderful potential for story, which sadly never materializes. There are some enjoyable sex scenes, waaaaay too much chatter about each other's sexual histories. There is no conflict--not between Doyle and Bodie, and not even between Doyle, Bodie and the former merc, Reilly. There is a LOT of talk. Still, the writing is quite nice:

He felt lips on his shoulder, heard Bodie tell telling him he was beautiful, the vulnerable words of love that were still only voiced in these moments.

Butch Bodie and the Sunshine Kid by Gena Fisher

CI5 partners and established lovers--and campy queens--Bodie and Doyle look into the firebombing of Bodie's flat which leads to the investigation of Cowley's kidnapping and a treasure hunt in Bodie, California. Much hilarity ensues--if you like that kind of thing. This is capably written, just not for me.

Seeking Krivas in order to exact revenge for the killing of his girlfriend, bounty hunter Bodie arrives in Gandia, Spain and stumbles across gypsy/circus performer/escaped fugitive Don DeMarco aka Eugene Sullivan. Bodie and DeMarco have sex and then Bodie arrests DeMarco and tries to transport him to England, but in the meantime Krivas is also hunting Bodie. He shoots Bodie in the shoulder, but Bodie and DeMarco escape on a train. DeMarco takes care of Bodie.

There's quite a bit of hurt/comfort and potential angst in this one--in fact, it could have been one of the strongest stories in the collection, but there's no believable interaction between Bodie and DeMarco that would justify DeMarco's coming to Bodie's aid, so the total emotional about-face of both men never rings true--frankly, such a psychological flip-flop is not even interesting.

Following Marikka's murder, Doyle follows a bitter and still angry Bodie to East Germany. In their escape back to the West, Doyle breaks his ankle, and Bodie must get them both out alive.

This was another good idea loaded with the potential for hurt/comfort and angst, but once again the execution is weak. The story failed for me on many levels. Midway through the adventure, DeVries apparently got tired of the whole thing and jumps ahead to Doyle and Bodie safely back at CI5.

The characterizations are really dreadful, and the story is full of dialog like this:

"You know I don't think you're stupid, Bodie. I have a tendency to talk before I think."

"Even words spoken without conviction have the power to hurt," Bodie pointed out.

A teaching assignment in France offers Bodie and Doyle a chance to mend their damaged partnership--and friendship--following Marikka's death. Despite some occasionally clumsy writing, this novella is the strongest story within the collection. The plot is complex, the conflict genuine, and the anguish each man feels seems believable.

Unfortunately, about a quarter of the way into the story Bodie takes a fall, fractures his skull, and the narrative skips to a lengthy 1792 historical AU. When Bodie recovers consciousness, all is forgiven.

I found the dream as relationship therapy to be a bit of a cop out. I'm not a huge fan of AU anyway, but I think the real problem here is that I was very much enjoying the contemporary story with all its complexity and conflicts, so the detour into dreamland, and the convenient solution to all Bodie and Doyle's problems, was disappointing. [4]

[zine]: This is in the zine Continental B&D, the one with the Suzan Lovett cover of Bodie and Doyle draped over the bonnet of a big car. 15 pages. This story is AU in that Doyle apparently doesn't exist, and Bodie never joined CI5. When he left the paras he became a sort of bounty hunter, finding escaped criminals. I can't quite work out whether it's supposed to be 1980-ish (Bodie is 30) or 1990-ish (it's post Ladder of Swords), but it didn't matter. Bodie encounters Don de Marco in Spain, and there is sex and then there is plot, which I shall try not to wreck entirely, by saying that even if he's not in CI5, a lot of Bodie's backstory is the same and comes back to haunt him in the form of a character we know from the series, and then there are feelings of betrayal and it's not over yet. I liked this story, although I was put off by the typos. I know some people feel that you shouldn't be negative in reviewing stories, but it's not the story, it's the editing - apostrophes in possessive its and missing where they should be, and hyphens in unexpected places, and someone's skin is "lathed". Ow. Other than that, I would certainly say it's worth a read. If you can cope with no Doyle, at least. It has a lovely last line, too, which really made me go, "Awww!" If you want to know why, highlight the spoilery bit here

hooray! The last line brings hope of a BEAR! [5]