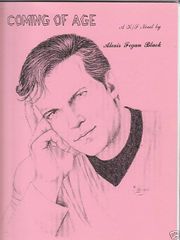 Coming of Age is a K/S slash Star Trek: TOS novel by Alexis Fegan Black. It was published by Pon Farr Press in 1991 and has 140 pages. The front cover illustration is by Dragon. The interior art is by Alayne

Summary from unknown source: "When Captain Kirk loses faith in his ability to command, he goes home to Iowa to find himself -- and discovers love in the process!'"

Publisher's summary: "At one time in our lives, most of us over the age of 30 have stood on the edge of the abyss and looked down into the darkness that lies there. Some call it madness, others call it the fine art of thinking too much, still others would say that it doesn't exist at all. For James T. Kirk, however, the abyss is all too real, and far too deep to climb out of without the help and the love of a trusted friend…"

Summary from Gilda F: "Kirk goes home to Iowa when the burden of command becomes too much after he learns of his personal connection to Captain John Christopher." 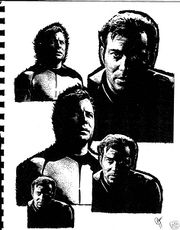 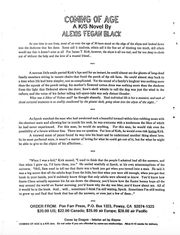 When I was a kid," Kirk mused, "I used to think that the people I admired had all the answers, and that when I grew up, I'd have them, too." He smiled wistfully at Spock, at his own misconceptions of the universe. "Hell, Sam used to tell me that there was a book you got when you turned into a man. He said it was a big secret that all the adults kept from the kids, but that when you were old enough, when you got that book in your hands, you'd suddenly know things that only adults were allowed to know. You'd know how Santa Claus actually squeezes his fat ass down the chimney; you'd know how the Easter bunny hops all the way around the world on Easter morning; you'd know why the sky was blue; you'd know about sex. All of it would be in the book. And… well… sometimes I think I’m still waiting, Spock. Sometimes I'm still waiting to grow up and find that book that has all the answers, or even just a few of them...

This is a short novel about the doubts that plague Kirk after the mission where the Enterprise encounters Captain John Christopher in 20th century Earth. It's also about Kirk suffering what amounts to an emotional breakdown, and the discovery of love between captain and first officer. There is something very beguiling about Alexis Fegan Black's prose when she gets cranked up. I whizzed through the first 80 pages of this story in just a few hours one evening, then finished it up the next morning. It was easy reading all the way through, and I definitely wanted to see what happened at the end. However, I was never really convinced that Kirk was suffering from such doubts about himself and life in general that it virtually paralyzed him. He discovers that he is remotely related to Christopher, and that if he had made the decision not to return Christopher to Earth he would have most likely snapped out of existence, and this is what drives him into such a deep depression that he is granted a weeks-long leave by McCoy to try to get his life back in order. This just doesn't jive with Kirk's character as I understand it. We are all prey to our dark hours of depression, but we generally manage to remain functional. I didn't really see what caused the captain to snap. It's possible that I could have been convinced of this if the author had taken some extra time with the novel to set the situation up. If we had seen the depression's genesis, and followed it as it grew, if we'd seen Spock there beside Kirk, not really understanding but wanting to help, it would have turned a fairly perfunctory exercise in fiction into a genuine psychological study. But instead the opening page has Kirk sitting on the porch on his mother's Iowa farm, already wrestling with his demons, so we aren't treated to a real understanding of Kirk's mind. The narrative consists of just three big scenes. There's a long opening scene between Jim and Spock on the farm one evening (Spock has beamed down from the Enterprise because of McCoy's concern for the captain, not because of his own motivations. This doesn't seem right.) At the conclusion of this section, Kirk basically collapses, has an emotional breakdown for want of a better description. The second scene takes place the next morning between McCoy and Spock as the doctor details what's wrong with Kirk, emphasizes its seriousness. McCoy actually relieves Kirk of command and puts Spock in the center seat, though with the ship in for repairs it's a moot point and they don't even bother to tell Kirk when he awakens. The third and final scene is the one that brings Kirk and Spock together, culminating in a nice sex scene, with AFB's typical sense of the mystical and the spiritual imbedded in each action. It was hard for me to accept that Kirk's emotional problems were cured by the love of a good Vulcan, but it seems that they were, because three weeks later he's ready to beam back aboard and take command again. Especially with McCoy expounding upon the serious nature of Kirk's problem in the center section of the novel, it was definitely an internal inconsistency to have the captain back to normal so quickly. There were some very nice, intimate scenes between our guys, especially those on the farm porch (the entire story takes place on the farm in Iowa). I liked envisioning Jim and Spock rocking on that double swing. And though normally I would say that Kirk's head on Spock's shoulder during such a scene is somewhat unlikely, the way this was set up and presented made it believable and satisfying. This was a story about what was going on inside Kirk's head, but even so it seemed that there was too much unvoiced mediation from both Kirk and Spock. A little more action would have helped.[1]