It was published four times a year for members of The Patrick Stewart Network.

"Four issues of the Coach's Club House, a high-quality magazine filled with reviews of Mr. Stewart's convention appearances and his stage, film and television work: letters of comment, fiction, poetry, and zine reviews, original artwork and many wonderful photos of our favorite actor."

Coach's Club House 9 was published September 1997 and contains 36 pages. The illustrations are by Anne Davenport and Janet D'Airo.

Includes some photos, two of Patrick Stewart and a huge snake around his neck. 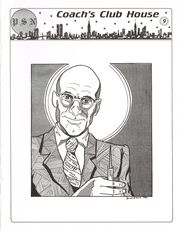 Coach's Club House 10 was published in February 1998 and contains 40 pages. Illos by Anne Davenport and Janet D'Airo, plus an uncredited one. 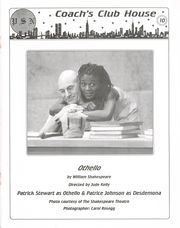 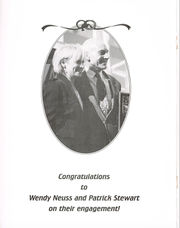 Coach's Club House 11 was published in May 1998 and contains 30 pages. The art is by Janet D'Airo, Anne Davenport, and Renee Bowe. 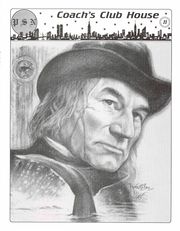 From The Tipster's Zine Reviews:

One of the fanfiction themes the Tipster enjoys the most are those stories which base themselves on an of Star Trek: The Next Generation. Missing scenes, continuations, even alternate endings or universes; they go by many different names. Too often an episode of TNG would proceed, tension building, only to be solved in a spout of technobabble in the last few minutes before the final credit run. Too often a gripping or traumatic episode wouldn't be followed in any way by any discussion of how our favorite characters dealt with their agonies and healing, and prior to the seventh season, very few attempts were made to tie up loose ends in the character's eventful lives.

For example, only one episode addressed Picard's recovery from his encounter with the Borg: "Family"—a realistic insight into his torment and doubts and an admirable attempt by the Trek execs to give us much more than an adventure each week and rather give us three dimensional characters. We saw his reaction to Hugh in "I, Borg" and of course his Ahab like behavior in "First Contact," but those really didn't spell out from A to B to C how he managed to put together his shattered psyche after his life as Locutus.

Which leads the Tipster back to the topic of fanfiction. Over the years, many talented writers have done their best to "fill in the blanks" for us, to give us what got "edited out" of the televised version, and in some remarkable cases, give us a surprising twist and take on a favorite encounter with the crew of the Enterprise D. Not surprisingly, these stories focus on the people, how they feel, how they interact with each other, and how they love and support each other.

Too often it's been said, unfortunately, and in the Tipster's opinion, unjustly, that the TNG cast never had the charisma of the TOS crew, that the interpersonal jousts and friendship never were apparent. Well, if Picard and Co. (and therefore, Mr. Stewart and his fellow cast members) never developed beyond the "yes, sirs" and "I feel pain" level, then how is it that these writers were able to create such wonderful stories? For these stories had to be based on what the writers picked up from the characterizations airing each week. And there's a wonderful consistency between these stories, which only goes to support the thought that the TNG crew was every bit as lovable and memorable, and as big a source of creativity as their predecessors.

And so, the Tipster unboxed all the zines collected over the years, forced herself to reread many stories, and came up with this rather incomplete list of favorites. Each story ties in wonderfully with an episode, and wouldn't you know it—many of those episodes are favorites, too.

Coach's Club House 12 was published in July 1998 and contains 28 pages. The art is by Janet D'Airo and Anne Davenport. 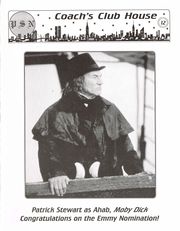 "Pat Chat," the AOL forum organized for fans of our favorite thespian is still active. Since October 1994, the chat room has experienced expansion and contraction in the number or participants ranging from as many as 15 to as few as two. Many participants are members of PSN; however the chat room is open to all who can log onto America Online.

In the chat room, we discuss Patrick's projects and interests. Quite often, we mention how Patrick's interests are affecting our lives. Several of us have or are currently reading books he has recommended, such as Moby Dick by Herman Melville and Le Morte D'Arthur, by Sir Thomas Malory. Others have joined Amnesty International.

Mostly women ranging in age from our 20's to our 50's, we have the benefit of youth and experience that is available for the asking when we need advice, encouragement and consolation. Wc have related experiences of life's happy events, such as new jobs and a Trek-themed bar mitzvah as well as life's tragedies, such as the loss of parents.

We are developing close friendships, in part due to "Pat Chat." It's another way that our interest in Patrick is helping us to expand our lives. "Pat Chat" meets on Thursday nights, usually at 9:00 p.m. ET. This Fall, we will meet at 9:30 p.m. ET. To join us, log on to AOL, click on Go To. Click on "Keyword" and type in pc. Click on "Find a Chat". Click on "Enter a Private Chat." Then, a box with a blank space will appear; type in "Picard" and hit the Enter key on your keyboard. You will have joined us. We hope to see you there!