This page is about the fansite. You may be looking for the Yahoo! Group christians4HP.

Christians For Harry Potter was a Harry Potter fansite hosted on FortuneCity. It was created by David Oliver sometime around 2002. Since FortuneCity's closure in 2012, the site is no longer online.

Welcome to the Christians For Harry Potter website. In this website you will find Harry Potter stuff like Harry Potter Short Stories, a Role Playing Game, Adventure Game, Information and Trivia. I also have some useful Christian information as well.[1]

The site had general information about the Harry Potter series, such as trivia pages for the books and films,[2] as well as short bios for Daniel Radcliffe, Rupert Grint, Emma Watson, and Tom Felton.[3]

It had pages for many Christian values that the Harry Potter books also teach, including compassion, love, honesty, mercy, bravery, patience, loyalty, humility, and self-sacrifice.[5] It also had pages describing other Christian themes in the books, such as "part of the plan of salvation" shown through Harry's mother sacrificing her life to save Harry.[6] Additionally, the site had pages contesting arguments that the books were anti-Christian, such as that the books are "driving kids to magic":

"Some Christians accuse J.K. Rowling of teaching magic to children. But the magic in the Harry Potter books series is mechanical magic that has nothing to do with occult practices. Words like Stupify and Avada Kedavra were not occult words at all. They are simply Latin words mixed with English. Children know that pointing a wand and saying Stupify is not going to do anything in real life. Most kids can tell the difference between fantasy and reality. There is no proof that occult magic has increased because of the Harry Potter books."[7] 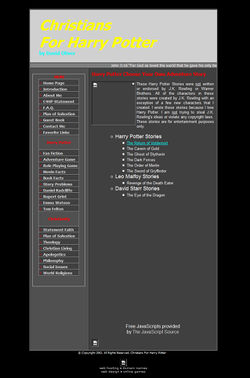 The site contained a page of fanfiction, apparently all written by webmaster David Oliver. Though called "fan fiction" and "short stories" elsewhere on the site, the page's actual header read "Harry Potter Choose Your Own Adventure Story".[8] The following stories were listed, though only the first ("The Return of Voldemort") was hyperlinked:

The page contained the disclaimer:

Though much of the information about the site's Harry Potter Role-Playing Game is now unavailable, some of the concepts and rules have been preserved. Like many RPGs, the game requried a Game Master:

"In the Harry Potter Role Playing Game you will need someone to be the Game Master. The Game Master or GM is the person that controls the game. He or she is who creates the stories and sets the stage for what is going on. They also control all non-player characters. A Game Master should have a good imagination. After all the entire game depends on you. The Game Master is also the one who controls the difficulty levels of each action and which modifiers to use. A Game Master should not be a player character since it would be too hard to control your character and the rest of the game. Besides you might be tempted to be biased in favor of yourself. Try to think about the Harry Potter world. Try to imagine what the characters would do. Being a Game Master can be challenging but it can also be very fun."[9]

The game used Skill Points, which could be added to various categories:

There was also a rule that could cause characters to "turn to the Dark Side" if they accumulated Dark Side Points by doing evil things: