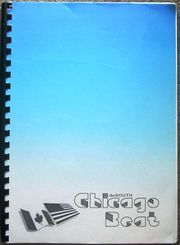 Chicago Beat is a slash Due South fanzine anthology published in Australia by Nuthatch Press. It has 130 pages and is coil bound (slightly longer paper). It focuses on the Fraser/Vecchio pairing.

As usual, the last thing to be written is the editorial - the morning before the zine is printed! So please forgive me if this column sounds as if it was composed in haste. It was.

I want to thank everyone who contributed to, and helped to produce and to market this zine: girls, you're angels! It wouldn't have happened without you, because as most of fandom knows, my private life is a chaos just now, and if the whole job were left to me ... woooh! But here it is, done, finished, printed, and I'm astonished. I'm also very pleased indeed with this issue, which surely has something (or everyone, and also something that touches on all three seasons of the show. It's been suggested that fannish interest in dueSOUTH has diminished since DM left the show, but if the reaction to the appearance of the CHICAGO BEAT flyer is anything to go by, I don't think this can be totally true. More likely, fans are still "'trying to get a handle" on the new format ... and, admittedly. wishing Ray-V was back. Ray-K is better than expected, but I've yet to hear from a fan who can see /-relationship potential ... or is enthusiastic about CKR. Hmmm.

This zine contains only, and all, Fraser/Vecchio pieces. Relax. There's a Season Three story, and you should love it!

Regarding Paper Size, Mailing Costs, and the "Invisible" Aussie Dollar

Lastly - you may notice that this zine has been formatted for American "'letter'" size paper. [Jackie B] and I are experimenting with printing in the US. If this works out, you will be able to buy the zines at cons for a much better price than having them bulk-mailed over ... but Jackie doesn't do mailorder, girls, so the only way to get new zines as soon as they appear is to order from Aus. Betty Ann will carry a few copies of the dS zines too, and can always place your order for you, if you don't like to send money overseas. The good news; the Aussie dollar has shrunk almost out of sight. If you have a credit card, and can avoid bank conversion fees, the zines are cheaper than ever! Email me for a quote ... you'll blink in surprise! Aussie zines right now, including shipping, are probably cheaper than zines produced anywhere else in the world. Why? Our dollar is invisible.