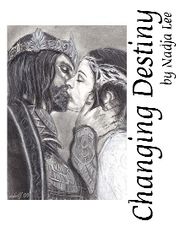 Changing Destiny are two novels by Nadja Lee. One is het and the other is the slash version.

Summary from a distributor, Agent With Style, for the het version: "This A/U novel is based on the movieverse and assumes Aragorn and Boromir, is raised by Denethor, and must deal with Boromir's intense dislike. The older boys join together to shield Faramir from his father's wrath, and slowly a strong bond forms between the three young men. As evil gathers against Gondor, Aragorn flees to Rivendell, and under Elrond's tutelage, he learns how to be a king. Years later, he returns to Gondor, to find Boromir changed and hardened. Faramir is chosen for the Fellowship, and finds his destiny, while Boromir and Aragorn together face sacrifice, and rediscover what was nearly lost, their brotherhood."

The slash novel is 230-pages long and the art is by Toshihiko Mizushima. 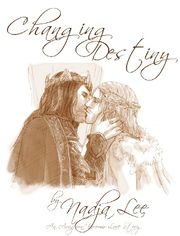 Summary from a distributor, Agent With Style, for the slash version: "This A/U novel is based on the movieverse and assumes Aragorn and Boromir are only a few years apart in age, and Aragorn has grown up in Denethor's household with the Steward's two sons. As Aragorn reaches adulthood, forces are allying against Gondor, forcing Aragorn to flee to Rivendell, where he learns what it means to be a king and discovers his true feelings for Boromir. When he returns to Gondor many years later, he finds Boromir a changed man, his heart closed to all save Faramir. While Boromir journeys on a Quest for his father, Faramir joins the Fellowship in his brother's stead. Through adversity, Faramir learns his true strength, his own grand destiny and discovers love, as Aragorn and Boromir discover the meaning of kingship, love and sacrifice."