Cat Tales is a het digest-sized fanzine with fiction written by Kim Prosser and Lisa Swope. In it, Vincent is involved in a relationship with another woman.

Cat Tales are our new, digest-sized (5-1/2" x 8-/2"), 70-page fanzines dedicated solely to Vincent stories in a universe independent of the series. Forging ahead in a world containing neither Catherine nor Diana. Vincent continues the search for his destiny. If you are offended by stories wherein Vincent forms close friendships with people (yes, even women!) other than Catherine, please ignore these titles. Some will be pre-Catherine. others post-Catherine, but all are for fun, with lots of entertaining, original characters. [1]

Someone Above has been writing what she thought was fictitious tales about Vincent and his world. He jsut discovered them; and she just discovered him... This zine is dedicated to Vincent tales in a universe exclusive of Catherine or Diana. [2]

This series often assumes a universe in which neither Catherine nor Diana has ever been involved with V. Here, V's involved in a relationship with another woman. [3]

Cat Tales 1 was published in December 1990 and contains 71 pages. It has the subtitle, "To Catch a Falling Star." The only art is on the cover. 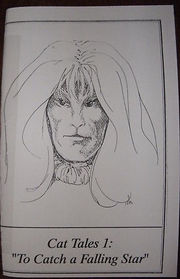 A well-written and interesting story but not for those who dislike reading stories that take place after Catherine's death, or those who will not accept the possibility of Vincent entering into another relationship. References are made to Catherine throughout the story. Vincent is still mourning but this is not the focus of the story. Hearing her cries, he befriends a young girl who is grieving over the death of her father. A popular writer, it turns out her books are based on stories told to her by her father who was once a helper. Events become interesting when Vincent becomes upset after he reads these books and sees his whole world and life exposed within their pages. Her view of him and the Tunnels differs greatly from reality. When the conflict is resolved, the reader is left with the feeling that the friendship will deepen. [4] 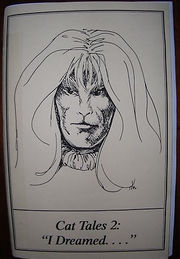 In this volume (all by Prosser), adult V recollects how, at a shy 22, he took an unwed, pregnant childhood friend, Charisse, eventually Samantha's mother--into his absolute and loving protection. Also "Touch of the Beast, " a brief account of Catherine's decision to move Below. [5]

Cat Tales 3 contains 51 pages and two stories. It has the subtitle, "Lost and Found."

...short stories with Vincent, in an alternate universe where he and Catherine haven't met. Helper Stacy is terrified of Vincent, but is forced to work with him to save lives. [6]

Cat Tales 4 is a 80-page novel by Denise called Changes.