Captain's Quarters is a newsletter published by United Federation of Trekkers.

"The United Federation of Trekkers is one organization concerned with the more practical, mature side of fandom."

Captain's Quarters 18 was published in February 1982 and contains 8 pages. 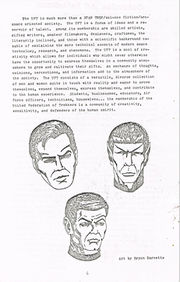 When Gene Roddenberry first sat down to actively conceive STAR TREK in the early Sixties, he had little idea of the phenomenon it would become. One of the single most popular programs in television history, STAR TREK, during its three years originally on the air, produced seventy-nine episodes that touched the hearts of millions. Its format of exploring morality, ethics, human understanding, human weakness and strength, and reminding its audience of the human spirit through well-conceived entertainment has made STAR TREK a cult among its diverse fans. Fourteen years after STAR TREK's cancellation, the TREK following is still in full force. STAR TREK's continued popularity is a testament to the incredible influence of television. Community organizations and lobbies were established throughout the nation by loyal followers to communicate and share in the prospects of the future and the human spirit as STAR TREK strove to promote. While some of these community organizations are exercises in irresponsible fantasizing and an irrational glorification of STAR TREK (which has given the fandom movement as a whole a bad name), still others are dedicated to a practical realization of a better future and concern for the continuation of the human race as indicated in STAR TREK.

Captain's Quarters 19 was published in March 1982 and contains 12 pages. 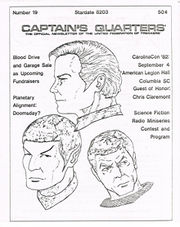