Call Me Brother is a K/S story by Deanna Gray. 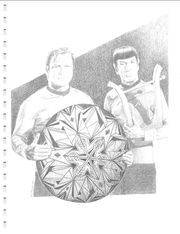 art by Kathy Stanis ("Kaleidoscope 9") -- " I get very moved when I see this beautiful work by Kathy because I was there when she decided to create this for Janet’s Kaleidoscope zine, literally days before Janet passed away. It’s beautiful in its own right, however, and the curved kaleidoscope shield is drawn perfectly as well as Kirk’s face especially. The slanted and gradient shaded design in the background creatively frames this lovely work." [1]

It was published in the print zine Beyond Dreams #1 and online.

"Spock takes Kirkʼs claim to Garth that they are brothers literally, but uses the Vulcan meaning of brother to define their relationship."

Prepare to be captured from the first sentence and hold fast to your beliefs that this is going to be a momentous account of Kirk and Spock discovering each other.

Spock cannot shake himself free of the declaration his Captain made to Garth of Izar. "...a dream that made Mister Spock and me brothers." But there is a difference in cultures here. Does "brother" mean the same to Kirk as it does to Spock? This question plagues them both, with neither willing to risk their friendship to define it. This is a deeply loving story written by a master of the art. The gentle way they explore each others feelings is exactly how I want to see my Kirk and Spock. They understand one another as, in Spock's words, "You would not lose me, Jim. I am always here for you." Isn't that what we long to hear? I don't know what to say about this love scene—at least not without my dictionary and a couple of hours to cool off from the effects. Does that tell you that it is steaming? Yes, it is! But what makes it so very hot is the perfect blend of love and passion. Balanced as it is, their lovemaking comes to life: rich, breathing life! All your senses are attuned to it—the sounds of flesh coming together, the warmth from Vulcan shrine and super- heated bodies, the beauty of these men in their prime. I'm ready to beg for mercy! There is one very practical bit of Vulcan lore in this story that I would love to see become K/S canon along with those exotic double ridges: Vulcan males' bodies provide lubrication. Of course they would! It's only logical for a race who has control of all bodily functions. And it saves those pesky last minute visits to the drugstore or sickbay!

A first time “misunderstanding” story. After events on Elba with Garth, Kirk calls Spock his “brother” without realising all the implications. He and Spock come to different conclusions about what he meant, and when Spock refers to Kirk as his T’hyla Kirk initially misunderstands as well. This is an interesting tale of how they overcome this communication problem, with both making incorrect assumptions about the other.[3]

This story is based on the scene in "Whom Gods Destroy" , when Kirk gives that impassioned speech to Garth about those who chose to explore the universe and reach out to others: "They were humanitarians and statesmen, and they had a dream – a dream that became a reality and spread throughout the stars. A dream that made me and Mr. Spock brothers".

It is those last nine words that form the basis for this story. For while Spock is well-aware of the meaning of that word when it comes to humans (a male sibling or a close friend), in his language, it means so much more. And it is that "so much more" which Spock desire to have with his captain. Yet he soon discovers that Kirk‘s remarks were indeed rather innocent, and that he only considers Spock to be a close friend, nothing more. This discovery leads to a change in their relationship, a change that Kirk himself may be unable to alter, even after discovering what those nine words really mean to Spock.

This story is a perfect blend of angst, misunderstanding, and heartbreak, leaving the reader aching for Spock who seems determined to deny himself what both he and Kirk want. The author takes her time to weave a tale of how the differences between two cultures can sometimes lead to misunderstandings, and how only when those differences are explained can people truly come together. The story is beautifully written, perfectly paced, and with on-the-spot characterizations of both Kirk and Spock. It is yet another unforgettable work from one of this fandom‘s most talented and imaginative authors. [4]