But the Memories Remain

But the Memories Remain is a Spock/Picard and Kirk/Spock story by Arachnethe2. 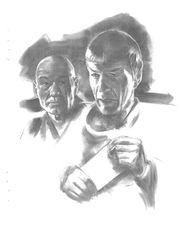 Al Laoang for But the Memories Remain

It was published in the print zine Amazing Grace (Special Edition, Best of 'Net K/S Sampler).

"A mysterious 80-year old letter, delivered by an unexpected visitor on a hostile world, brings turmoil and finally, a semblance of peace of mind to the recipient."

This is a truly amazing story for a variety of reasons. I reread it last night in preparation for writing this LOC and ended up with tears streaming down my face. So sad. So poignant. So very Arachnethe2. To begin to understand some of the things that are special about this K/S story, the reader might want to take note that the author's native language is not English. Some of her phrasing is a bit unusual. However I have never seen this detract from a story (check out her other stories on ASCEM and ASC); instead her language add flavor to the story. In some place just that slightly different turn of phrase emphasizes a point that might otherwise be missed or underestimated. There are also rare times where the reader needs to pause and think about the meaning and a new insight hits.

Really a treat. As with the other stories in this zine, I hope this one will lead readers to check out other stories by Arachnethe2. She is one of the most clever new writers I've read. She has so many ideas that have zing to them; no staid Star Trek for her. Yet she stays in character and within canon except where it is obviously not intended to be. I think Dot did a service to the zine readers in highlighting this author in "Best of The Net." I hope we will see more of her stories available in zines in the future. For our fandom to stay exciting we need her and more like her. (Note for anyone who doesn't have web access, I'm sure you have a friend who could print stories for you. For that matter, I volunteer [address redacted].) Back to the story. In the posting on the newsgroup, Arachnethe2, introduced this story by saying, "I accept the challenge to write an alternative story to the and- they-have-lived-happy-for-ever stuff. But folks, after Killa's ‘Turning Point’ and ‘Ghost in the Machine’, and besides the fact, that Star Trek series is in its attitude sooooooo horrible positive and political correct—I must honestly confess, this was really, really difficult." I think you can get a feeling for the vivid personality of the author just from this. Then into the story. Warning now, stop reading if you don't want to be spoiled. It takes place after both of Kirk's deaths. We follow Picard through his emotional trauma of losing his brother, nephew, and ship. He finds a letter to Spock from Kirk and decides he must deliver it. His sense of honor and, I think, friendship to both men comes through clearly in his choice to brave the Romulans to get through to Spock. We hear Picard thinking about what he has heard of Spock. "The most amazing thing is, Jean-Luc, that he has never played chess. All the Vulcans I have ever met were fascinated by this game. But not him." Without saying it, we are shown a detail so small in a casual conversation, but so perfect as a symbol of Spock's avoiding things Kirk, and the pain associated with the memories. Picard delivers the letter and helps Spock deal with the trauma of hearing of Kirk's second death and admitting their love. In truly beautiful verbiage, we are brought into the highly emotionally charged time. We see the love Spock has carried for Kirk, and the total love Kirk had for Spock. Read this story, unless you have to believe the world is always a happy place.

As a parting thought, some of Spock's last word to Picard. Sad, poignant, and revealing. "Jim was never made for paradise and neither am I. He is not there any more. Jean-Luc, Jim is dead. All that remains of him is in my memory." [1]

For what it’s worth, here are a few thoughts on this somewhat controversial but undeniably memorable story. First question: did I like it? No, not really, for reasons I’ll try to explain. At the same time, I find a great deal to admire here. For one thing, the writing style is often quite good. There are some awkward sentences and word choices, but the overall effect is lyrical in many places—no small accomplishment for an author whose first language is not English.

I also think the basic story idea is wonderfully inventive. Even though I personally have never cared for Picard, who simply does not strike me as attractive in any way, the plot of this story is both dramatic and plausible, given the events of Generations and of TNG episodes involving Spock and Sarek. But—and for me this is a major stumbling block—the sex scene between Spock and Picard strikes me as completely gratuitous. I can’t claim to “know” Picard well enough to say whether such behavior is out of character for him, but I certainly think it is for this mature Spock, grieving or not. It seems to me that the author missed a great opportunity here. Simply eliminating the sex scene would have made this story far more plausible and focused without decreasing its emotional impact. We would still receive insight into Picard’s state of mind and discover with him Spock’s secret love for Kirk, but without the distraction of an unlikely physical encounter.

Despite this, I have no quarrel with the K/S content. The author’s intent is clearly to show Kirk and Spock’s love rather than merely to tell about it, and this is strongly done by presenting events from Picard’s point of view. I think the premise is sound, but the story ultimately fails due to a fatal flaw in its execution.

I’m afraid I must also say that while the epilogue is less important to the structure of the story as a whole, in some ways it bothers me even more than the sex scene. I don’t quite see the point of graphically describing Spock’s execution, unless it’s simply for shock value. This section also seems not to fit stylistically with the rest of the story. It suddenly reverts to “telling,” and presents a great deal of information in just a few paragraphs, at that. This is a perfectly legitimate technique, but I think that ending with Kirk’s letter would have been far more powerful and would have kept the focus on the more personal events at the heart of the story.[2]

I'm not exactly thrilled to read about Picard and Spock and when they have sex together.... Well, this is supposed to be K/S, isn't it? It really doesn't matter that Picard is bringing tidings of Kirk's death, the center figure is Picard, not Kirk and not Spock. If I'd wanted to read about Picard, which I don't, I would've bought another zine." [3]

When I discovered this was about Jean-Luc Picard and Spock, I almost abandoned it. When Picard discovered a letter, yellowed with age, in a book owned by Jim Kirk, I gave it a few more minutes. When that envelope said, “For Spock”, I had to go on.

There are aspects I don’t believe contributed— especially the token sex scene between Spock and Jean-Luc. I saw no reason for it in the context of the story. It seemed to be there only for its shock value.

The premise, however, has promise. Spock’s acceptance of Jim’s death on the ENTERPRISE B, his refusal to succumb to the temptation of following him into the Nexus, are interesting and somewhat unusual.

I couldn’t decide if the end was sad or something of a relief. It was, I suppose, a beginning of sorts. [4]

In a previous issue, another reviewer was fairly scathing as regards this story. I respectfully submit that the reviewer in question is missing the entire point of the story. True, the foreground action concerns a meeting between Spock and Picard on Romulus. But the entire weave of the story is suffused by thoughts of the love between Kirk and Spock; the depth of it, the suffering both of them went through during their time apart, the joy each could give the other when it all went right for once. And there is a certain tragic inevitability to it that appeals to me immensely, both in the foreground parts, and in the remembered past events. Spock's fate hurts -- but damn, it rings True. The letter Jim wrote to him also hurts, and it also rings True. And if, deprived forever of his One and burdened by pain he cannot longer bear alone, a man seeks solace, only once, in the arms of another, is that really so peculiar or incomprehensible a thing? Or is it simply the human thing to do? Those who like their K/S all sweetness and light will hate this story, I know. Those for whom any sad outcome is anathema will be well advised to go on to another story and read that instead. But those who like an occasional sad one, who understand that it is the pain in life that makes its joy all the sweeter, why, those folks will enjoy and appreciate this story very much indeed. And it is for those folks that I am here to set the record straight. It takes all kinds of folks, and all kinds of stories, to make up this universe of ours. IDIC, always. [5]