Brother's Keeper is a Professionals 28-page story by Frankie Jemison. 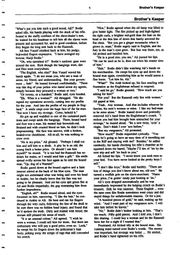 It was a circuit story and was later included in Heat-Trace. Heat-Trace is a sort of sequel to Brother's Keeper, and not one without controversy.

Brother's Keeper was mentioned in the 1992 essay: Angst and emotional dynamics in slash, as exemplified in Helen Raven's "Heat Trace".

In 2010, Helen Raven noted that "Anonymous," whom she credited for "Brother's Keeper" was Frankie Jemison:

"Heat-Trace" was a two-year effort to get Frankie's "Brother's Keeper" out of my head.[1]

From the Author's Preface to Heat-Trace

"Brother's Keeper": the story I couldn't get out of my head: "Brother's Keeper" reached the UK in 1984, and I think I read it in that year. It got to me immediately - the idea of the two wounded men finding healing in one another, becoming one another's true family. The only problem was that it was too short -- I wanted more, much more, of the two of them taking on the world. For six years I lulled myself to sleep thinking vaguely about their first meeting back in London, and then I finally took myself in hand and started writing about it.

To the author of "Brother's Keeper": Thank you, thank you, thank you. Thank you first of all for writing the story. And then for giving me permission to include it in the zine, even though you had read not a word of "Heat-Trace", and could not know what I was doing to your characters. I hope you enjoy it.

'Brother's Keeper' [14 pages], the starting point, is a B/D story by an anonymous author, which appeared on the circuit in 1984. In the story, Doyle, (still a London policeman), is abducted by a North African slaver, and rescued by Bodie. who is working undercover for CI5. As they make their way slowly home to Britain, a strong bond develops between them. The last few pages of 'Brother's Keeper' suggest that Doyle will join CI5 as Bodie's partner, and things will continue as we know them. This is very neat and plausible, but disappointing for the reader who wants more. One reader wanted much, much more, and lay awake nights wondering 'What if Doyle didn' t join CI5? How would their affair develop?' 'Heat-Trace' is the answer to these questions and the others that arose along with them. 'Brother's Keeper' is included in the zine by generous permission of the author.) [2]

The premise is that Doyle is captured by a slave dealer during a police raid in which his partner was killed. Bodie, apparently some sort of mercenary or slave trader, appears on the scene (in Africa) and wants to buy Doyle from the slave dealer. The slave dealer wants revenge against Doyle and won't sell him to Bodie unless he can watch Bodie rape him. [3]

Brother’s Keeper, by Frankie is one of the very few stories that starts their relationship off with rape that makes you believe it.[4]

I like to see Bodie as bottom man occasionally, plus which I dig this author's descriptions (the vertical ones, too).[5]

The best thing this author has done. It's always fun to take Bodie and Doyle out of their normal environment, and this works well. A fun story.[6]

Angsty, but happy ending; Suffering is Doyle, but not by much... Kidnapped away from the land of his birth, pawed at by nasty people, raped by a stranger, bought like a piece of meat, knifed although that did feel kind of rushed) I think the little nipper (AKA Doyle) came out at the high end of the suffering scale. You're right. Definitely a Doyle-lovers story. [7]

Whoa-howdy is Bodie the seducer here...(there is something about "I'm raping you for your own good that really works for me - -like that airline one we were talking about earlier, when Bodie has to take the girl and then Doyle has to take Bodie--bad, but ooh.) Suffering is Doyle, but not by much...Doyle definitely the innocent one, and even more definitely the bottom. Another Doyle-lover perfect story. [8]