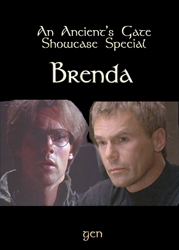 Summary from the publisher says this collection "contains all the gen stories written by SG1 mainstay Brenda and includes the beloved Decoration Day, Vindication, Prodigal's Return, and many more. This volume is the third of a series we’ll be publishing over the next few weeks and months that, I feel, reflect some of the best of an era of fandom that was magical and innocent and just purely lovely."