Blind Run is a slash and gen Professionals anthology. The gen stories are in issues one and four. 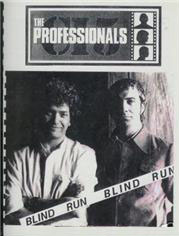 Two of Gena Fisher's stories, "Without a Cluedo" and "Kisses For My Mummy", are crossovers with the Brit TV game-show series Cluedo (aka Clue), in which LC played the role of Colonel Mustard in the third series. In "Without a Cluedo", the Lads investigate the Clue mansion.

"Mind Games" by Londa Pfeffer is a hurt/comfort fest in which someone from Bodie's past threatens to kill Doyle, leading to concussions all round on the way to resolution.

In "Dark Ages Past" by Liane Beck, Doyle accompanies his lover Bodie to his twin sister's funeral, only to discover the Bodie family are all psychotic or paranoid schizophrenics. In the end, the mother dies, everything burns, and the Lads re-pledge their love to each other.

Daria Littlejohn's GEN "When We Grow Up" is a friendship/domestic story featuring football, two little girls who live next door, and housecleaning.

In "Full Hearts" by Vicki Martin, Bodie happens upon evidence about Doyle/Murphy and becomes jealous; Murphy tells him that Doyle wants him instead. The Lads are reunited after Bodie takes a bullet meant for Murphy.

"Toss of a Coin" by Ray O. Sunshine is a GEN story in which Doyle is captured, drugged, tortured, and threatened with rape before Bodie finds him.

"Professional Observer" by Tipsy shows us Bodie and Doyle through the eyes of aliens.

"Waiting Games" by Skye is a CI5-based case story about stolen art. 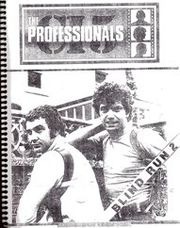 Blind Run 2 was published in 1994 and contains 155 pages. Artwork by Daria Littlejohn, Cat and Anja Gruber. 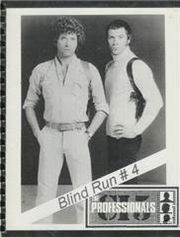