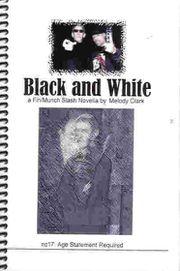 Black and White is a slash Law and Order: SVU 101-page novel by Melody C. It was published in 2004 and is the sequel to Love is the Law.

"One former New York Special Victims Unit detective observed, "Nobody sees what we see." Unbeknownst to his SVU colleagues, one of their own had seen all that and more. As revealed during his days on "Homicide: Life on the Streets," John Munch has a dark and haunted past, but as his partner Fin and John embark upon their new life together, Fin discovers pockets of John's past about which he'd never known. And he calls upon John to make changes to ensure their future together. The only question is whether John is strong enough, at this late date, to change." -- from Agent With Style

From the Author's Preface

"What follows is a novella sequel to “Love is the Law”, my first Fin/Muncher, though I expect it can be read as an existing relationship novella by itself. I’ve also added a short story and a vignette to fill out the zine. The story has been circulated very little. The vignette has been around while, but I decided to add it on for those who hadn’t seen it and may want to (btw, to those who cannot countenance het, there is a tiny bit in it)."

"My Munchean inclusions this time include a proviso about some various story revelations regarding John’s personal history. I very nearly removed this one subplot because I thought it (in aggregate form) came across as a Lifetime movie or one of those “buck up, brave little soldier” fan stories that throws a ton of horrific circumstances at a single media character and then has him/her sail through it nobly. The latter sometimes comes off as Mary Sue-esque (a clear coinage, that). However, my own opinion is there’s no such thing as good fan fiction that ISN’T Mary Sue, since you need to put your own gut in the story to make it work."