You may be looking for Cascade Beyond the Veil, a Sentinel zine. 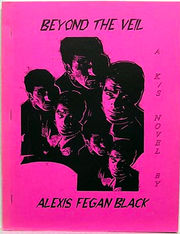 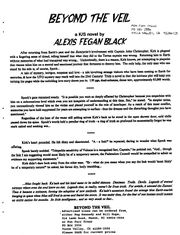 Beyond the Veil is a K/S slash Star Trek: TOS novel by Alexis Fegan Black. It was published by Pon Farr Press in 1992 and has 147 pages.

Summary from the flyer: "After returning from Earth's past and the Enterprise's involvement with Captain John Christopher, Kirk is plagued by a lingering sense of dread, telling himself that what they did to the Terran captain was wrong. A tale of mystery, intrigue, suspense and love - a tale involving strange visitors who have been coming to Earth for centuries and how the UFO mystery may reach well into the 23rd century!"

Summary from Gilda F: "When alien delegates come aboard the Enterprise, Kirk has flashes of memory regarding his, until now, unremembered abduction."

Spock's gaze remained steady. "It is possible you were so deeply affected by Christopher because you empathize with him on a subconscious level which even you are incapable of understanding at this time, Jim," he stated. "In simpler terms, you unconsciously viewed him as the victim and placed yourself in the role of interloper. As a result of this inner conflict, memories you have held suppressed for years are attempting to surface - thus the dreams and the disturbing thoughts you have mentioned." Regardless of the heat of the water still pelting across Kirk's back as he stood in the open shower door, cold chills passed down his spine. Spock's words held a peculiar ring of truth - a ring of truth so profound he momentarily forgot he was stark naked and soaking wet…

This fast moving story takes elements of ancient folk lore, modern UFO sightings and so-called 'abductions' and cleverly combines them with a wonderfully crafted K/S tale. The author nas obviously done her homework on the history of UFOs on Earth over the centuries. When the story begins after the events in tne episode "Tomorrow is Yesterday", Kirk is a troubled man. bothered by strange dreams and no-quite-remembered torments and tortures. The part where Spock explains his sexual affair with Saash-Hael while at the Academy would ordinarily have bothered me except that it was explained by Spock being his 'trying to be human' phase. Under those circumstances it would be conceivable that he might try just about anything to further His human experience. It did bother me slightly that a Starfleet instructor had sex supposedly in a regular basis, with his own cadets. (Someone might have a real good case of sexual harassment.) But I have to admit that the sex scene between Spock and Saash-Hael was wonderful. This author can write them better than just about anyone else. The Zameni's, as described, were truly horrific and diabolical -- enough to make your hair stand on end. The evolution of the Kirk/Spock relationship was handled realistically with ail the warmth, understanding and support that makes K/S such a great love story. I really enjoyed this novel. Ms. Black never fails to amaze me with her writing talents and her ability to weave a wondrous tale of mystery, love and romance.[1]

BEYOND THE VEIL made me contemplate the differences between eroticism and pornography. How far am I willing to go, as a reader, to imagine Kirk and Spock in sexual situations? How far will we, as writers go when the stock first time plots and the typical scenarios have already been examined. and no longer have the intrigue of the new for us? For me. BTV caae perilously close to crossing my own personal boundaries of what is 'acceptable'. Obviously, everyone will have a different definition of what acceptable is. But just because they will differ does not mean that I cannot at least communicate why and how this author, in my opinion, crossed the line. I was more disturbed by the treatment of children. The young Jimmy Kirk was regularly being raped by brutal, utterly evil aliens, and their actions had long-lasting effects into his adulthood. Not only that, but he was only one of many thousands of young humans who were regularly kidnapped, tortured, raped, emotionally manipulated, and then returned to Earth with their memories wiped. These youngster were somehow forced into fertility, and on subsequent kidnapping, were compelled to watch their own very young offspring tortured, and murdered, so that the aliens could feed off their horrified emotions. To the author's credit, these scenes were not graphically detailed, but they were an integral part of the plot that could not be ignored, or glossed over. To understand BTV, the image of children being sexually and tortured had to be in your mind. Perhaps what is so disturbing about this scenario is in juxtapositioning of it against the developing sexual relationship of Kirk and Spock. The tenderness between the two men might have been a much needed and welcome contrast to the horror and violence of widespread child abuse being perpetrated by the aliens. But that possibility fails for two reasons. Number one. The entire K/S relationship in BTV seems to exist in isolation to the rest of the story. The developing emotions between the two men had very little to do with their motivations or actions as related to the main plot line. If the K/S portions of this 140 page story were to be excised, there would still exist a hefty 110 pages or so of action/adventure (and in my opinion distasteful) gen plot. Since there was so little intertwining of the two story lines, there was no mitigating tenderness from Kirk and Spock to soften the horror of the main piot. In my opinion this was a structural deficiency. The novel almost reads like a gen story with K/S grafted on. It's surprising to see this from a writer as accomplished as Alexis Fegan Black. Number Two. The way in which the author chose to reveal Kirk and Spock's sexuality only added to the negative view of sexuai relations that was explicit in the aliens' treatment of children. She presents Spock as having 'indulged' in a submissive/dominant sexual relationship with a kinky, male Starfleet instructor, for two years during his time at the Academy. Supposedly, Spock did so in an effort to explore his 'humanity', an argument that I found to be naive, and too weak to be convincing. (And if this is what Spock thinks 'being human' is all about, boy, did he have some misconceptions. Spock's relationship with the instructor came complete with the use of sexual apparatus (even during their first encounter), and the dark imposition of the kind of play acting that precludes an honest emotional relationship within the sexual one. This experience is what Spock brings to his partnership with Kirk, and there is the strong suggestion that their own subsequent activities will be a continuation of those Spock 'enjoyed' with Saash-mael. Add to that the fact that Saash-mael almost managed to seduce Kirk in a similar fashion when he was at the Academy, and the cycle is complete. Nowhere in this novel is there a 'novel', loving, emotionally fulfilling relationship... [much omitted due to review length]... I found this novel particularly frustrating because Ms. Black is such an accomplished writer. She is probably capable of writing about anything she chooses, and doing so well. I argue what she has chosen as the topic of this novel. For me, it presents a twisted, offensive view of sexuality, and I would hate to see K/S sink into this type of presentation. What is eroticism? What is pornography? Are there 'redeeming social values' in BTV? The most strongly written scenes are the sex scenes between Saash-nale and Kirk, and then Saash-mael and Spock. Do these contribute to our understanding of the characters, or were they simply gratuitous sex? In this novel, the answer is yes, the sex scenes did help us understand the characters. But I would submit that the characterizations themselves were skewed to being with, and I had the uneasy feeling that they were so distorted, from the beginning, just so that the scenes of sexuai domination, and the use of sexual apparatus could be written. Whether or not that was the intent of the author, that was the impression that I as a reader received. Life isn't black and white, it's grey, and my reactions to BTV will not be shared by everyone. But I personally don't want my K/S laced with sexual abuse of children, and while kinkiness on occasion can be an exciting addition to Kirk and Spock's physical relationship, I don't read K/S to get a catalog description of sexual apparatus. It's characterization I want, insight into their minds and hearts that I crave, and it's so darn frustrating to see an author who has all the talent to give ae that, who ignores it. [2]

I've always enjoyed this writer/editor's works because she's always kept me intrigued with how she explores different themes. BEYOND THE VEIL is no exception -- it is superb and I loved how Ms. Black tied in K/S with the study of UFOs. which made this a unique first time story as well as a believable conjecture on the whole UPO phenomenon. The author's use of UFO documentation was chilling and at times disturbing because of how she extrapolated the "facts". Not only did I get a better understanding of this controversial subject, but in particular, the emotional, physical and psychological trauma of abduction of both children and adults was a powerfully gripping aspect which heightened the dramatic tension of the story -- especially since Kirk was also a victim. With that in mind, I enjoyed Spock's support of Kirk, in that he backs him up against the Zaaeni on both emotional and psychological terms while both of them are beginning their relationship: through the beyond, his belief, strength and support of Kirk is shown. Most of all, I loved the fact that personal matters combined with professional concerns: Kirk must face his own inner "demons" while at the same time his mission is to "welcome them with open arms" into the Federation. Because this is so, the K/S relationship is wonderfully shown to be an integral part of the plot: K/S works! The more I read the more I wanted to know, which kept me turning the pages to discover how it would all come out. Even so, one thing I didn't care for was the idea that Kirk, admittedly desperate because he was traumatized by painful memories, would seek to prove his point by seducing the Zaaeni ambassador dressed in tight jeans, etc., although the imagery is a turn-on. On the other hand, I liked very much the irony of Kirk's inexperience vs. Spock's affair with the same man,and the resolution of the Zaaeni problem was poetic justice and therefore right up my alley. All in all, in my opinion. BEYOND THE VEIL is an excellent K/S novel, and I look forward to Ms. Black's next work, whatever it is. [3]