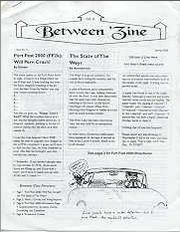 Between 'Zine was a Dragonriders of Pern weyr update, meant to supplement Harper Beat.

"The first, I mean very first Between 'Zine was created in April of 1989. My spouse and I had hosted a series of Fort Weyr club Gathers in our home in Pittsburgh back then. Each had a theme, this one was "Spring Games", a kind of Pernese Olympics. This Gather even had a bonus 'Zine for people who came.

Diana Stein did the cover, which shows "Zac" (Z'del) and Jetta prior to either of them Impressing of course...

The first "Real" Between 'Zine wouldn't come about until nearly 5 years later. The club was having some problems with both Time and Money. We couldn't keep up with 6 issues of 80+ pages a year. By the time we mailed out a Harper Beat, it was time to start printing and copying the next....

In February 1994 the club made a decision to drop to 4 Issues of Harper Beat per year. It was a very tough decision. We were worried that we'd lose continuity with our members by going quarterly.

Our solution was to create another 'zine. I worked up a layout and edited the first year's worth of the now familiar "Between 'Zine".

The Between 'Zine (or B'Zine as it is affectionately known) was a news oriented 'Zine designed to come out between each Harper Beat and bridge the 3 long months between issues. It was numbered accordingly—the first issue was "61 ½"." [1]