Better Part of Me

Better Part of Me is a 148 page slash Smallville anthology with a cover by Cat's Meow Creative Arts. 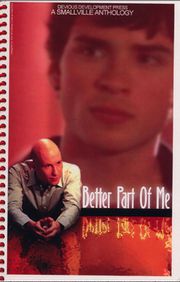 The submission request: "A Better Part of Me. CLex, digest sized. Happy endings preferred but will discuss others." [1]

From a distributor, Agent With Style: "The four long tales that comprise this slash Smallville zine will pull you into the world of Lex and Clark, where, intellectually, Lex knew he would be happier if Clark was completely out of his life, but he still hadn't managed to asphyxiate the annoying voice that was telling him otherwise.—Not that he had never indulged in a sexual fantasy featuring Clark in the years since they had met, but this dream seemed more real, more tangible somehow—and much more!"