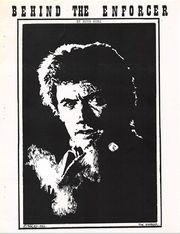 Behind the Enforcer is a slash Harry and Johnny 93-page novel by Ruth Kurz that takes place in 1976.

It has a sequel called Bicentennial Trek.

Summary from the author: "A good position, Johnny says."

The zine contains song lyrics by Paul Williams: "You and Me Against the World."

The zine contains many black and white screenshots and publicity photos of Clint Eastwood and David Soul, as well as other actors. At least one of these photos is an early photomanip. One of the characters in the story is the recurring Ben who is a medical doctor (fan casted by Paul Michael Glaser). There are also two hand drawn illos by Ruth Kurz.