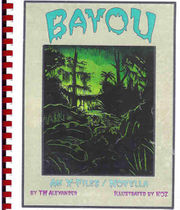 Bayou is a 172-page X-Files novel by TM Alexander. Art is by KOZ.

There are slash Mulder/Skinner and gen versions available.

From a distributor, Agent With Style:'"While on vacation to see relatives in the deep south, A.D. Skinner becomes involved in a search for a missing girl and has a close encounter of the first kind on a deserted access road in the dead of night. Left no other alternative, he calls the one man he knows will believe him. Fox Mulder. Come be transported to New Orleans, Louisiana, during Carnival season and embroiled in an eerie legend that has been passed down from generation to generation among those of the Cajun Heritage for nearly two centuries. Can Mulder and Scully solve the riddle before another child disappears?"