BULLSEYE is an art and fanfiction zine focusing on the ship McHanzo, which ships the characters Jesse McCree and Hanzo Shimada from Overwatch, featuring artwork by various artists. All profits from the zine were intended to be sent to the True Colors Fund and Stonewall Japan - two LGBTQ+ organisations that represent Jesse and Hanzo's home countries, the USA and Japan respectively.[1]

However, the zine has been mired in a great deal of controversy surrounding the actions of its admin, Lynn, who has been accused of stealing funds from the zine which were intended to be donated to charity, delays in shipping the zine, and a refusal to communicate with other members of the fandom surrounding the zine, as well as previous anti-social behaviour within the fandom. (See Controversy).

BULLSEYE is an unofficial fan collaboration dedicated to Hanzo Shimada and Jesse McCree, both of whom are characters from the video game Overwatch. More specifically, this is a collection of work created by talented fans who have a love/appreciation for the ship McHanzo. The zine is not only a tribute to the relationship between our favorite archer and gunslinger, but also a way to honor the McHanzo community as a whole. By compiling McHanzo-based fanwork that is physically accessible for all fans, we hope to draw our section of the fandom closer and spread some positivity along the way.

Proceeds from the zine were pledged to be donated to Stonewall Japan, a charity for the LGBTQ+ in Japan (http://stonewalljapan.org/) and True Colors Fund, a charity for homeless LGBTQ+ youth (https://truecolorsfund.org/).

The BULLSEYE zine was closely associated with a Tumblr blog called McHanzone, which was run by two admins, Lynn (who ran the zine) and Ghost. Many members of the fandom also spent time on a Discord server of the same name. While the zine was being put together, a user named Mango made a Tumblr post warning about Lynn's behaviour on the Discord server towards users that she disagreed with:

These are the kind of people who run the popular mchanzo blog. These are the people who run mchanzo week and who are running the Bullseye mchanzine that I’ve seen so many people I follow talk about contributing to. I’m not telling anyone to unfollow, or leave the server, or to not participate in these events. Your support of the mchanzone is entirely of your own volition. But you should make that decision knowing who you’re contributing your art, fic, and valuable time to.[2]

Then, after the zine was published, Lynn was accused of stealing $1,400 in funds from the proceeds (that were supposed to go to the above mentioned charities) to buy Voltron: Legendary Defender merchandise. A blog formed for the purpose of keeping track of the controversy, mchanzone receipts, detailed how Ghost, the co-admin of the McHanzone blog, discovered suspicious payments being made from the zine's PayPal account, and confronted Lynn about the issue, who was evasive:

This situation was initially discovered and brought to our attention by the other former administrator of the McHanzone Tumblr blog, who goes by the screen name Ghost. Shortly after Ghost retired from the Tumblr blog, they visited the Mchanzo Gmail account to log out. Their attention was drawn to a large number of Paypal receipts, for which there appeared to be no corresponding zine-related purchases. Naturally, they went to Lynn directly, assuming there was some legitimate reason for these transfers. Lynn’s responses were vague and limited to excuses regarding shipping rates and the purchase of chains and other accessories to be used in the packages sent to zine purchasers.

When Ghost pointed out the discrepancies between the zine-related costs and the Paypal transfers, Lynn became defensive, claiming that her mother had pressured her to take sums of money from the zine account amounting to at least $1,400 US dollars, to be used to cover home expenses. She claimed that she would return this money when she received her next paycheck. This money has not been returned, to our knowledge, and when Ghost recently asked her to provide evidence that she had returned the money, Lynn responded only by saying, “Are you kidding me?” and producing nothing.

When Ghost questioned Lynn regarding the numerous smaller transfers and receipts for Voltron merchandise, Lynn became totally unresponsive. She immediately proceeded to lock Ghost out of the Gmail account and, oddly enough, delete her personal Facebook profile.[3] 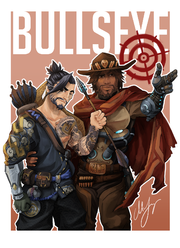 A redrawn version of one artist's zine cover art submission for BULLSEYE, by diefuss

Many would-be recipients of the zine have since complained about delays in receiving their copies along with other items that they were promised (such as Mchanzo lanyards which were intended to be bundled with the zine),[4][5] while others have reported that they successfully received their copy.[6]

Recently, the owner of the mchanzone receipts blog has talked about filing a civil suit against Lynn due to her consistent refusal to address the issue of the PayPal payments.[7][8]

aughtpunk published a review of the quality of the zine on Tumblr:[9]

The zine itself is printed on flimsy paper that wouldn’t be so bad if it was just writing. The combination of cheap printing and even cheaper paper really does a number to the art. Colors are muted and darks are way too dark. The To Ashes zine on the other hand is printed on paper more like a magazine’s and has a nice gloss to it. It really makes the world of difference.

As noted elsewhere the pictures in the zine are horribly cropped. Some appear to be stretched larger to fit the page, while others are chopped along the edges to force them to fit. [...]

The first thing that jumped out at me when I saw the pdf of this zine is that there’s no titles on the stories. Nor are the authors listed. Instead there’s no way to really tell when one story ends and another begins. Each story has this large gap at the top. A gap that could have listed a title and author name. There’s also ten blank pages in Bullseye so it wasn’t because of a lack of space. No, this was done on purpose for some baffling reason.