Avalon is Risen is a filk album by Leslie Fish.

From the CD's booklet: 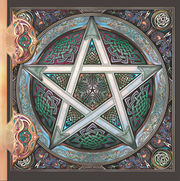 front cover of the booklet that accompanied the CD 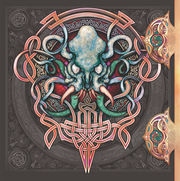 back cover of the booklet that accompanied the CD

A new culture needs a new music. From that unique intermingling of science fiction fandom and pagan revival that emerged from the ferment of the sixties come these classic examples of "Bardic Magick," performed by the inimitable Leslie Fish, and ably supported by Kristoph Klover, Margaret Davis and a stellar crew of fellow musicians.

Leslie has been part of the movement since Isaac Bonewits was doing ceremonies in Don Simpson's living room in Berkeley. Inspired in style and sensibility by Woody Guthrie, she gives us the music of a new folk community. Whether one takes the old gods as faith or fiction, these songs hold insights we need. Here you'll find myth and magic, a sense of wonder and a sense of humor, and threading through the lyrics the sometimes ominous awareness that not all legends stay safely in the past.

The title piece - "Avalon is Risen" - was written by Isaac Bonewits, founder of the Ar nDraiocht Fein. There are also songs by authors such as Rudyard Kipling and Poul Anderson. But all, whether Leslie is responsible for the music alone or the lyrics as well, reflect her passionate perspective, and are performed with verve and skill. "Hallows Dirge" and "Rise Up, Bright Sun" are pagan hymns, and "Mount Tarn" is a spell. "The Earth's Fire-Breathing Daughter" and 'Jack the Slob and the Goddess of Love" are comic tales of a pagan culture, and the "invocation" to Cthulhu is an alliterative tour de force of parody. "Hymn to the Night-Mare" evokes the spirit of Celtic legend. In "Ship of Stone" we see how the mythic instincts of our past might shape the legends of the future. "Chickasaw Mountain" presents a new myth about the cost of the bardic bargain.