Antiques and Delectables is a slash Lovejoy Eric/Lovejoy anthology that includes a lot of crossovers with The Professionals.

The zine was published in 1993 and contains 159 pages. The art is by KOZ, Alayne, Seraph, TACS, Angi Towski, H. Ann Walton, with lots of Dover clip art.

While it was titled #1, there was only one issue.

It was to originally be titled "Of Antiques and Mayhem." 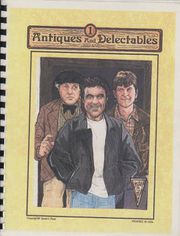 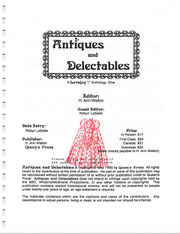 Eighteen months ago I came upon an advert for LOVEJOY while channel-hopping. It grabbed my attention because men with dark hair, blue eyes, and British accents make me weak in the knees. After the second episode I was in love, not only with this Adonis, Lovejoy, but also with his adorable companions Tinker and Eric.

Back in January '92, i decided to put together this 'zine. I began to hear from people who wanted Lovejoy slash, but not with Eric. They were gagging at the thought, saying "He's ugly!" or "He's stupid!" it got to the point where I wanted to hit the next person who said it.

Well, we all wish we had IQs over 200 (some would be happy with 100), and an exquisite body like Fabio (well, at least I would!), but alas we can't. I think the real ugliness and stupidity in the world comes from people who say another person doesn't deserve love simply because of looks or intelligence.

Besides, Eric Catchpole is neither ugly nor stupid. Sure, he screws up a lot, but that's because he wants to please Lovejoy so much he becomes nervous and self-conscious around him. In our re_al lives, haven't we aii wanted to please someone so badly that every time we were around them everything went wrong? I know it's happened to me, big time.

Well, I've preached enough, now I want to thank some people. First, a big thanks and hug to all my contributors. Without you talented people I wouldn't have a 'zine. A very special thanks to Koz for the wonderful color cover; you're one special lady. And I'd like to end here with a very, very sincere Thank You to some wonderful friends.... Gena, Paulle and Tami Marie. Ta, mates! I'm not sure if I could have survived this last year without you guys. I love you all.

Enjoy the 'zine and remember: Never buy antiques from a guy with only one name.