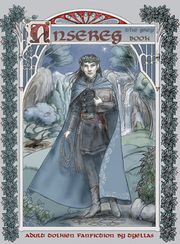 Ansereg - The Grey Book is a slash fanzine featuring fan fiction written by Tyellas. It was published in 2004 and contains 126 pages. Color cover by Hope Hoover.

Publisher's summary: "These stories extrapolate a shadowed, intense side of Elvish sexuality, from the War of the Jewels in the Silmarillion to the conclusion of LotR. This zine collects all the standalone Ansereg stories and three new tales within the framing device of an intimate journal. New stories include the Ansereg origin tale ‘Blood to Iron' (Maedhros/Fingon), ‘Praise the Birch' (Legolas/Haldir), and ‘Fine Physic' (Elladan/ Elrohir)."

From the back page: "One Ring to Bind Them", the novella from which the selection The Circle of Ansereg was taken, was honoured in the 2003 Mithril Awards for Tolkien Fanfiction with: Best Silmarillion – Voters’ Choice, Runner‐Up for Best Drama, and Runner Up for Best Silmarillion. "Thrice for Honour" received a Judges’ Choice Award in the 2003 Galvorn Awards that focus on Silmarillion fanfiction. "Knives in the Dark" received an award as an outstanding piece of Haldir fanfiction." Haldir Awards.

Table of Contents For Printed version

The online PDF has a few additional stories and an additional 25+ pages.