THE ANNIHILATOR IS A FAN PRODUCED PUBLICATION WHOSE SOLE PURPOSE IS TO ENRICH AND SUPPORT FAN RELATED ACTIVITIES. THE TERMS "KLINGON" AND "STAR TREK" ARE REGISTERED TRADEMARKS OF PARAMOUNT PICTURES CORPORATION. ALL RELATED MATERIALS UNLESS INDICATED OTHERWISE. IS COPYRIGHTED BY THE KLINGON LEGION OF ASSAULT WARRIORS. (ALSO KNOWN AS K.L.A.W.) K.L.A.W. TAKES NO PART IN THE PRODUCTION OR PARTICIPATION OF ANY ACTIVITY OR ACTION, WHETHER IN PRINT OR PRACTICE, THAT DIRECTLY OR INDIRECTLY CONTRADICTS, OFFENDS, OR DEFAMES OUR COUNTRY, OR ANY FORM OF RELIGION. NO PART OF THIS PUBLICATION MAY BE COPIED OR DISTRIBUTED, TRANSMITTED, TRANSCRIBED, STORED IN A RETRIEVAL SYSTEM, OR TRANSLATED INTO ANY HUMAN, NON-HUMAN, OR COMPUTER LANGUAGE IN ANY FORM. WITHOUT THE EXPRESS WRITTEN PERMISSION OF THE KLINGON LEGION OF ASSAULT WARRIORS. ALL INDIVIDUALS NOT RECEIVING SAID PERMISSION WILL BE KILLED, OR ENOUGH DAMAGE WILL BE INFLICTED THAT THEY SHALL WISH IT SO TO AVOID FURTHER ANGUISH OR EMBARRASSMENT. 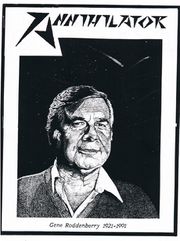 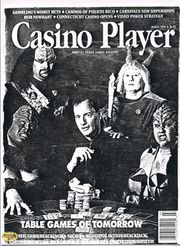 the ad that is the back cover of v.1 n.6, see the con report at StarCon for an explanation
The Sub Commander's Address:

I have mixed feelings when I look back at the man known as Gene Roddenberry. Through this man, we are able to live on other worlds and travel through space in the twenty-third century. Through him, we were given the inspiration to pursue the lifestyle, triumph, defeat, honor and glory, as members of the Klingon Empire by forming the Klingon Legion of Assault Warriors.

Gene Roddenberry allowed us to explore strange new worlds with his Federation crew, and, at times, tempted us with brief glimpses Into the Klingon way of life. He was not afraid to take his series into "risky" areas which made television executives cringe! This man should truly be honored for his accomplishments. However, I also see another side of Roddenberry others may or may not have noticed. In his latter years, Roddenberry, to me, seemed to become to protective of his television/movie series to the point of wanting to be "king of the hill". Those such as the FASA Corporation were stifled in their attempts to breathe new life into the Star Trek universe - who competently filled in the gaps of past and present Trek history and were chastised because Roddenberry said ft "wasn't official". I believe Gene Roddenberry was afraid to share his creation with others, and this may or may not have hurt the current Next Generation series.

Despite some of the negative feelings I have towards Gene Roddenberry, I have and always will respect him for the creation he has shown us. I do not know if anyone else in Hollywood can maintain the loyalty he had for Star Trek, but as long as WE keep the dreams and hopes of this man alive, then our lives in the twenty-third century will continue as he intended them to. Mr. Roddenberry. you will indeed be missed. -- Kraath Santai Ajerris