And On the Sixth Day

And On the Sixth Day is a Kirk/Spock story by Bersakhi. 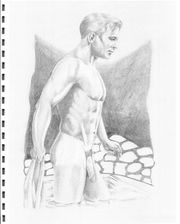 art by Marianne Mueller ("Midnight Bath") -- "What a beautiful work. Here we see Kirk standing in a pool that’s bordered by stone (also very nicely rendered). I loved the beautiful play of light on Kirk’s body— very difficult to do and to do so well. And the fine detail of his profile. Of course, one of the most striking aspects of this piece is Kirk’s gorgeous nudity." [1] Another fan writes: "This pencil (I assume) is a very nice three-quarters figure of Kirk, completely nude and definitely full frontal. If you just saw the face by itself apart from any Star Trek stuff, you'd never guess it was Kirk. But Kirk is hard to draw, and, in truth, the face is close enough to Kirk to be credible. Some of my very favorite artists, like Chris Soto, didn't always draw totally realistic faces for Kirk, anyway. The body is just to drool over, and I did." [2]

It was published in the print zine Beyond Dreams #2.

"Kirk and Spock are having a six-day, McCoy-enforced shore leave on a tropical, mostly water planet."

This is a very atmospheric story. The tropical, mostly water planet where Kirk and Spock are having (a McCoy-enforced) six days of shore leave is a richly described setting; and literally, the very atmosphere of the place is so charged, and informs the events that take place.

The descriptiveness is done well; we see the place through Kirk's perceptions, not in removed narrative.

The dialogue feels authentic, too. It's an art to put information across in dialogue but not have it sound likea lecture, and this author did this well. For instance, the guy who meets them on the planet and gets them to their bungalow-we learn about him from his dialogue, but it still sounds like natural (enough) dialogue.

I couldn't really figure out if their bungalow is the only one on this island; or maybe if there were lots of small islands close together where there were other people.

I always have to talk about POV. A number of 'flaws" in POV crop up here. But then, I'm a vigilante about this; and other writers, and readers, don't necessarily care. It seems we're in a nice, clean Kirk POV, then all of a sudden some observer is observing Kirk's "smooth chest" or "amber eyes." It wouldn't be in Kirk's mind that he's "running his hands down his smooth chest" or some such, unless he just used depilatoryand is checking out how nice it feels.

Not many hints of desire for each other in the beginning, only of a respectful friendship. The story is long and slow...which is effective for lulling us into the kind of space that Kirk and Spock are in. The things that do happen are just daily lifeon a resort island; and things such as Kirk getting sunstroke and Spock caring for him. This is fine, except then it seemed every evening and night was described in just one paragraph-they played chess and went to bed, for instance. I would imagine those evenings would be a prime time for the hidden feelings to start coming out, or at least for some of that sweet awkwardness.

The first magical moment that happens is when they're holding on to each other as they tread water, and this is quite lovely to envision. They're not revealing their feelings yet, but it's so obvious something is going on that must be revealed soon.

Kirk's water nightmares (what a useful device this bitof K/Scanon is, Kirkhaving nightmares) are used to good effect, too, when eventually Spock points out the obviousness of what they probably mean.

And then...finally, finally...Spock admits his feelings in words, admits that Kirk's presence "excites" him. I love Kirk's line: "If you were anyone else, I'd know exactly what to do next."

This is a sweet conversation, their admissions to each other; Spock's response made my heart laugh. I realized there's a fine line between "banter" and "repartee."Banter Idislike; but this was repartee (Ithink that's the right word), and was very in character, and was very sexy.

It's an interesting thing that at this point, Kirk'sworry is that the friendship, and the working relationship, will change. This is a moot point, though. As Spock says, it has already changed.

Then, we can't have them just easily fall into each other's arms, can we? No, we want some angst. And there was some here-fairiy mellow angst, not tortured, but setting up for the final resolution to be even more satisfying. Notjust angst within each of them, but some sparks of anger fly...before the gorgeous moment of finally falling into each other's arms, there in the rain on the wet sand. This was perfection. I saw it and felt it so clearly.

Oh yes, and there's a poem that Kirk was writing as he whiled away the hot days inside the bungalow. It's a good poem, too, having to do with the "Psi 2000" episode reference, the beach to walk on. And a short- and-sweetending.[3]

This is a 26 page story which is basically a shore leave first time story. As you might tell from the title, it's divided into seven parts—an introductory set-up for the shore leave and then the six days of the shore leave. This time the men are visiting a watery world called KMbali. And wouldn't you know it, but they stay in a bungalow which only has one bed. Naturally, Spock spends some time on thecouchbeforetheystarttheirsexual relationship.

Kirk gets a sunburn, which I could sympathize with because as I was reading the story in bed I was shivering from the sunburn I had gotten earlier in the day. Spock, of course, gets to put soothing salve on him. They do various things together on leave like sailing and night swims.

One of the things that happens in the story is that Kirk writes a poem for Spock. It takes him three days. I was impressed with the poem. It's nice enough that it could easily stand by itself as a poem in the zine.

The story begins and ends with McCoy, giving the story some symmetry.[4]

This was a nice change of pace from the previous story, with Kirk and Spock sharing leave on a small island on a mostly water dominated planet and has some lovely descriptions of the stunningly beautiful planet where they are sharing leave for 6 days. I loved the author’s interpretation of a tropical island, and the thunderstorm every day scenario was especially enjoyable, and helped build tension in the story as tension between Kirk and Spock grows at the same time. Its always nice to see the guys able to kick back and relax once in a while, and this was an excellently told story with lots of good moments and nice touches, like Kirk trying his hand at writing and even while on leave Spock is conducting research on the planet where they are staying – absolutely typical! It was also nice to see how Dr McCoy uses his understanding of both men to manoeuvre them in taking shore leave together in the first place. Although the end of the story was never really in any doubt, the tensions was well maintained making this one of the best parts of the whole zine for me anyway.[5]

McCoy arranges it so Kirk and Spock go on a shore leave to a beautiful, tropical planet, K’Mbali (love that name!)

The author did a wonderful job creating such an unusual place. It’s very hot and sunny with such brightness that Kirk needs special tinted lenses to protect his eyes. Primarily a water world, it’s a big tourist destination and I enjoyed all the great detail about the private islands booked years in advance, the tropical storms and downpours that occur each day along with the natives’ chanting at sunrise and sunset. Very creative. Kirk and Spock spend the six days (divided each day into sections) in a thatched roofed bungalow by the beach. Of course, there’s only one large bed.... I loved that there was a library with “real books”. And Kirk does some writing on “real paper”. They decide to take walk and both put on shorts. I’d love to see that! Kirk stands under the downpour and makes Spock stand with him. Minor awkward writing moment: “Best get on something dry.” Kirk gets a bad sunburn and I loved that Spock applied accupressure to take away his headache. During their time in this beautiful place (described with lots of detail, especially about the water) they go sailing and swimming and watch the gorgeous sunrises and sunsets. But then Kirk has dreams of tidal waves, drowning and dangerous waters. Spock wants to talk to him about it, but Kirk doesn’t. Later, Kirk tries to analyze the dreams and realizes that they have to do with his feelings for Spock—that he’s being inundated with his emotions. Kirk tells Spock about his feelings and they decide to wait to do anything about them. It turns out that Kirk is very afraid of losing their friendship if they engage sexually. But they really do love each other. A neat scene of them kissing and making love outside in the storm. Kirk wears boxer shorts, huh?

Although a little repetitive, the metaphor of the water and Kirk and Spock’s emotions was well done. I especially enjoyed the wonderfully creative water planet with its unusual flora and fauna.[6]