An Honest Fantasy is a cassette tape by Karen Rothenberg. 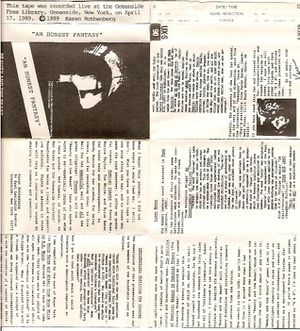 The tape is a lecture/meta about the show Beauty and the Beast (TV). Rothenberg reads aloud her opinions, and the opinions sent to her by fans, about the meaning and appeal of the show.

From the tape cover:

The description of this presentation sent out to the members of the Roundtable read as follows:

Karen will talk on the many questions raised about tradition fairy tales by the popularity of the current TV series "Beauty and the Beast." (try to view it Fridays at 8:00). Why should we adults be so concerned about what has long been considered 'children's literature'? What is children's literature'? What is adult literature? how does this dichotomy affect our perception of fairy tales -- their meaning, their validity, their enjoyment?

Now I got to that point where I could formulate a description requires an explanation.

I was compelled by the work of Roger Sale in "Fairy Tales and After" From Snow White to E.B. White." to face the idea that, once, fairy tales were for people of all ages, but became the literature of children with the 'invention of childhood.'...

When I began this journey, I did not know where it would lead me. I still don't. What you have on this tape is a stop along the way...Thanks to all the Beauty and the Beast fans who spoke to me, especially those of you whom I have quoted....

Finally, the comments of the last fan quoted at the very end of the discussion were from the letterzine Passages #6... If you have read this far and listened this far, congratulations, and thanks for hanging in there. I hope you will share this tape with other friends and fans of "B&B" and discuss the ideas presented there.

Go in peace, with love and courage