Alternate Fantasies is a series of het Beauty and the Beast historical novels printed in fanzine form. It required an age statement.

Alternate Fantasies 1 is subtitled: "The Beast of Wells." It was published in October 1991, has 76 pages, and is by Jacquelyn S. Kapke. It was edited by Sharon Wells. 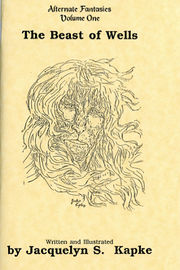 In this pleasant zine, in an all-purpose Medieval setting, Lady Catherine, abducted by brigands on page 1, is further abducted from those brigands by "The Beast of Wells" (guess who), a long-time enemy of her uncle/guardian. Expecting to be roughly treated by the master of the castle, whose animal appearance and appetites are legendary, Catherine instead finds herself treated as a noble guest and offered return to her own people with no demand for ransom. Rather unconvincingly, Vincent manages to persuade himself that Catherine's in love with his best friend, who accompanies them on the return. Instead of welcoming C, her uncle savagely attacks the party, severely wounding V. Then C sees what true savagery is, and makes her choice. The story rattles right along, so though the end isn't really in doubt, it keeps those pages turning to the end, which is graphically sexual, with the author's own occasional illustrations.[1]

This romantic fantasy places Catherine and Vincent in Medieval times. Princess Catherine is abducted and eventually finds herself the guest of Lord Vincent - an enemy of her royal family. This story line closely parallels that of the television show. Vincent feels a Bond with Catherine and, after getting over her initial shock at his appearance, Catherine realizes she is falling in love with him. Naturally, the road to true love is never easily traversed. The hero and heroine suffer much but do get their Happy Ever After in the end. Explicit sex.[2] 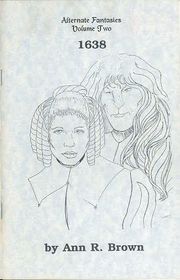 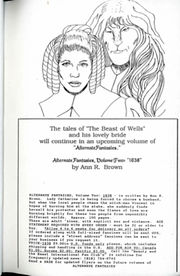 flyer
From a publisher's flyer:

ALTERNATE FANTASIES, Volume Two: 1638 - is written by Ann R. Brown. Lady Catherine is being forced to choose a husband , but when the local people chase the witch-man Vincent in hopes of burning him at the stake, she suddenly finds herself his protector and soon the flames of love are burning brightly for these two people from impossibly different worlds. Approx. 100 pages. These are adult 'zines, with explicit sex and violence. AGE STATEMENT REQUIRED WITH EVERY ORDER - must be 21 or older to buy . Allow 4 to 6 weeks for delivery on all orders.

Although it's been out awhile, this zine is well worth the having, by a zine author much better known now than she was then. In this charming "Another Time" story, Lady C is the mistress of an impoverished 17th Century English manor whose fortunes are expected to improve when her arranged marriage to wealthy rake Lord Jehu takes place. Enter V, pursued: an alchemist and healer, accused of being a warlock and dealing in Black Magic. C hides the fugitive and gradually comes to know and love this strange, learned man...and look forward, less and less, to her approaching marriage to cruel fop Lord Jehu. C is credible, levelheaded, and courageous; V is charmingly diffident in his outcast status and fierce in a fight, as one might expect. To protect C's lands, they marry...but still have a considerable way to go before they become husband and wife in truth. When they at last get together, the explicit erotic sparks fly. Excellently written, with the unobtrusive and effective period detail readers have come to expect from this author. A couple of nice illustrations by Sharon Wells.[3]

In this second volume of the series, set in England in the 17th century, Lady Catherine is placed in the position of having to choose a husband. Fate intervenes when she rescues witch-man Vincent from a mob and hides him on her estate. Eventually they enter into a marriage of convenience, neither knowing of the other's love. Everything is resolved happily in the end. Explicit sex.[4] 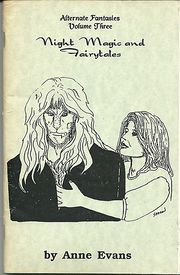 Alternate Fantasies 3 is subtitled: Night Magic and Fairy Tales. It was published in January 1992, has 55 pages and is by Anne Evans. Art by Sharon Wells. 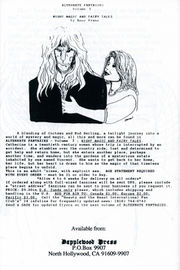 flyer for issue#3
From a flyer:

A blending of Cocteau and Rod Serling, a twilight journey into a world of mystery and magic, all this and mote can be found in ALTERNATE FANTASIES - Volume 3 NIGHT MAGIC AND FAIRY TALES. Catherine is a twentieth century woman whose trip is interrupted by an accident. She stumbles over the country side, lost and determined to get help and return home, but she enters another place, perhaps another time, and wanders into the gardens of a mysterious estate inhabited by on* named Vincent. She wants to get back to her home, her life, but her heart is drawn to him as the magic of that timeless place begins to unfold.

C, returning by hired plane from an assignment for the DA's office, arrives after a crash landing at a strange, timeless castle whose sole inhabitant is an unusually confident V, who presses his romantic suit unceasingly until C agrees it's destiny--true. There's an opening and epilogue in which mysterious, apparently disembodied voices discuss the castle and the Beast's destiny, but these rather opaque sections do little to clarify what's going on. Whatever, C/V find one another and C gladly gives up the hectic modern world for love. Two unmemorable Sharon Wells illos.[5]

Catherine is a 20th century woman whose trip is interrupted by an accident. She finds herself in another place and time on the estate of one named Vincent. Author appropriately describes this as a blend of Cocteau and Rod Serling. Explicit sex.[6]